Record planes and such

Record tools of England entered the plane's field rather late, in 1931. By then the Stanley's Bailey design was pretty well established as THE metallic plane to copy, the majority of patents having long expired. 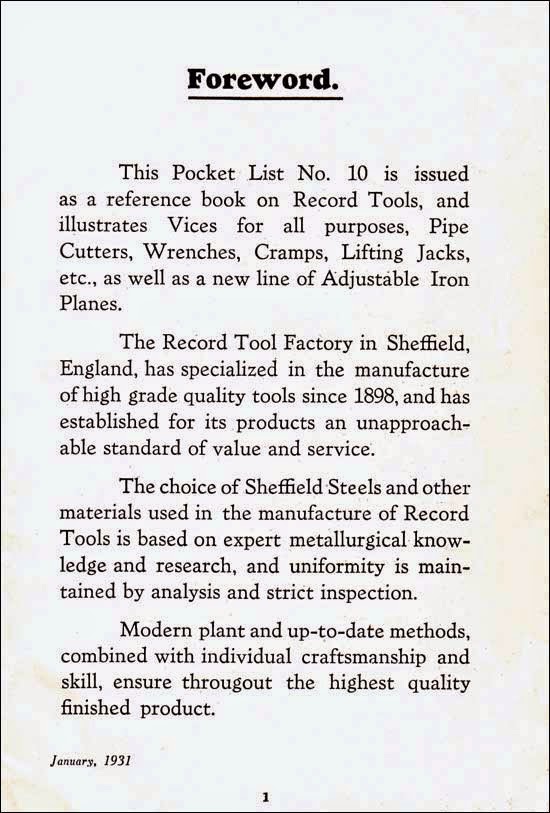 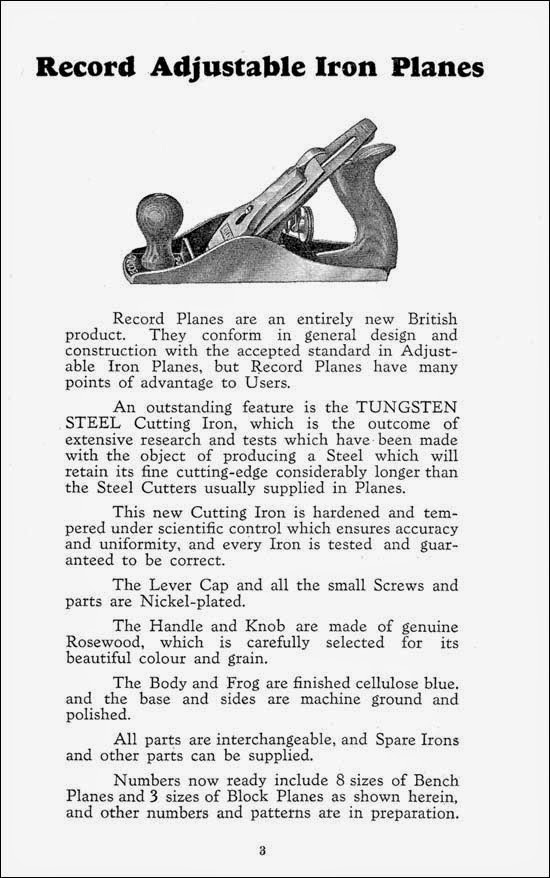 Record still managed to add a few more twist to the design. The larger planes No 5 , 6, 7 and 8 sport diagonal ribs in the rear of the casting to strengthen it and reduce warpage.
The usual cap iron  is in two pieces, the nose piece on the cap iron could be detached.
The bright idea was that you didn't have to remove the cap iron in order to touch up the flat face of the iron, when deburring the edge, and you did not have to reset the cap iron position on the iron thus saving time. They called it Stay-Set (SS).
This Stay-Set features was introduced in 1931 and lasted until 1965.

I'm frankly not a big fan of this arrangement, but you can still buy such a cap iron today from Clifton in the US from Tools for Working Wood and in the UK from Workshop Heaven. Which it could be argued is the direct descendant of this Record invention.
Here's a Review from Chris on the Clifton and its Stay Set cap

Record plane of this era sport the SS logo on their lever cap, which an indication of what is to be found under the blade, a frog like the Stanley Type 11, mine and many others favorite design. 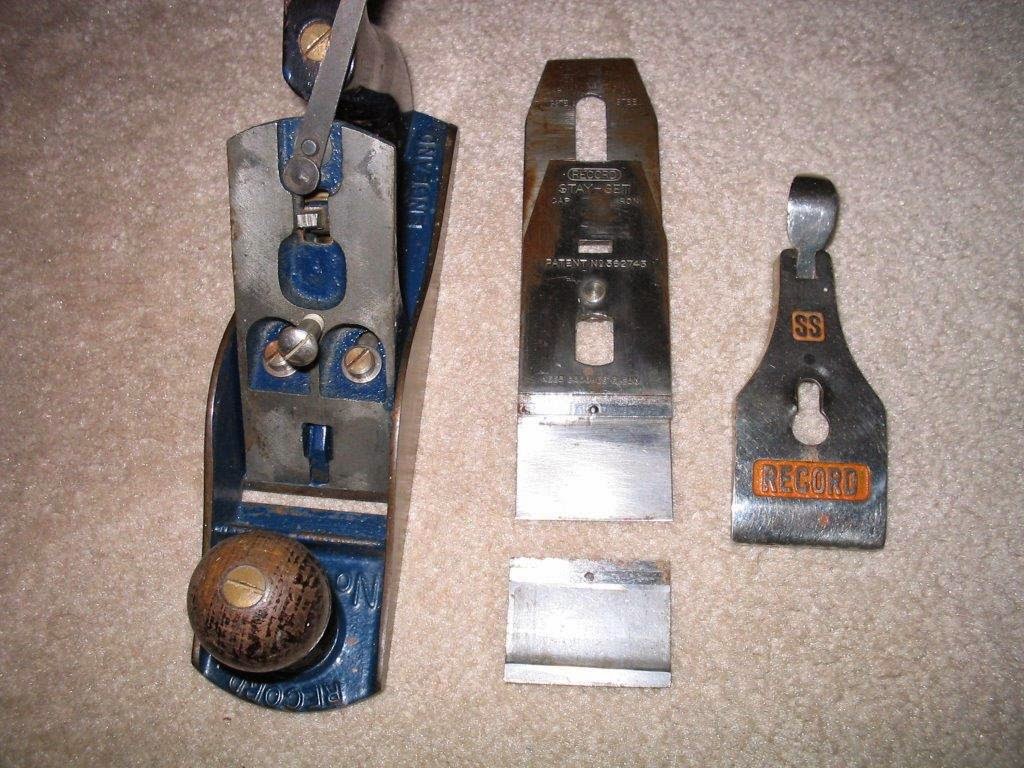 My Record No 04SS

It did not took long for the handles to switch from Rosewood to plain stained hardwood. 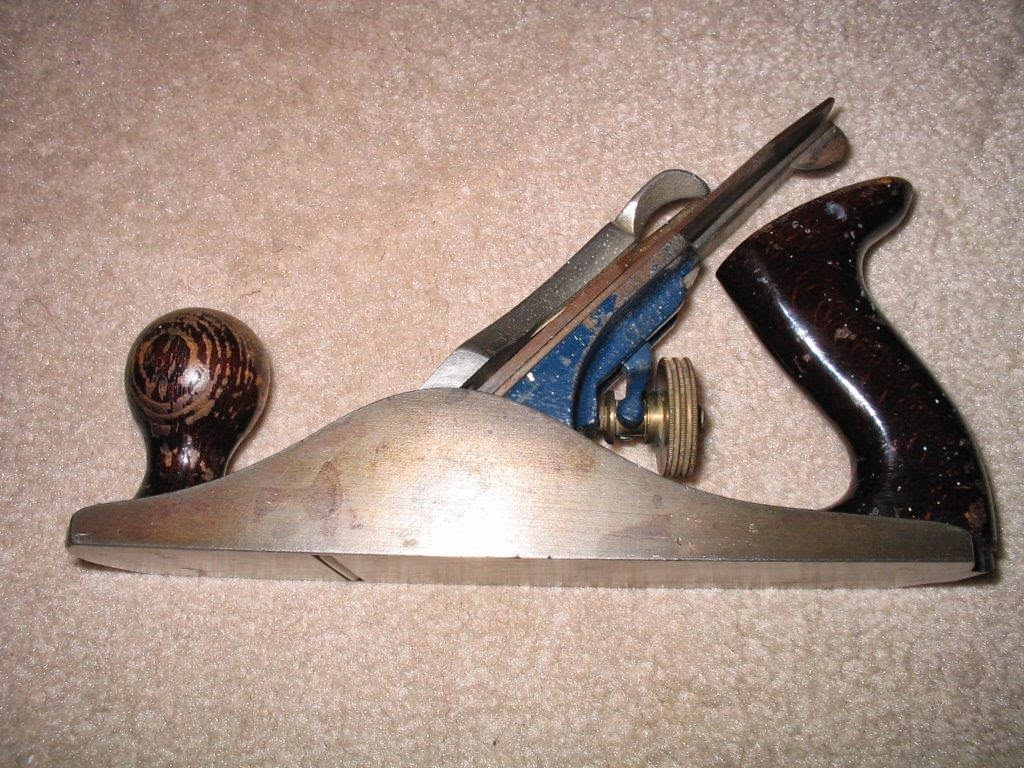 The handles on my 04SS are just plain hardwood, no fancy rosewood here, but everything about the casting and machining indicates a robust woodworking tool capable of a high finish on wood.

Later generations of Record tools started sporting plastic handles in the 70s, a sign that quality was going down, just like Stanley...

In 1934 they acquire the rights to Preston tools and started to produce some of their spokeshaves and shoulder planes. Most were somewhat modified design.

One notable short lived smoother plane (it was very expensive to produce) was the Record Calvert Stephens CS 88. It was only made between 1988 and the early 1990s. 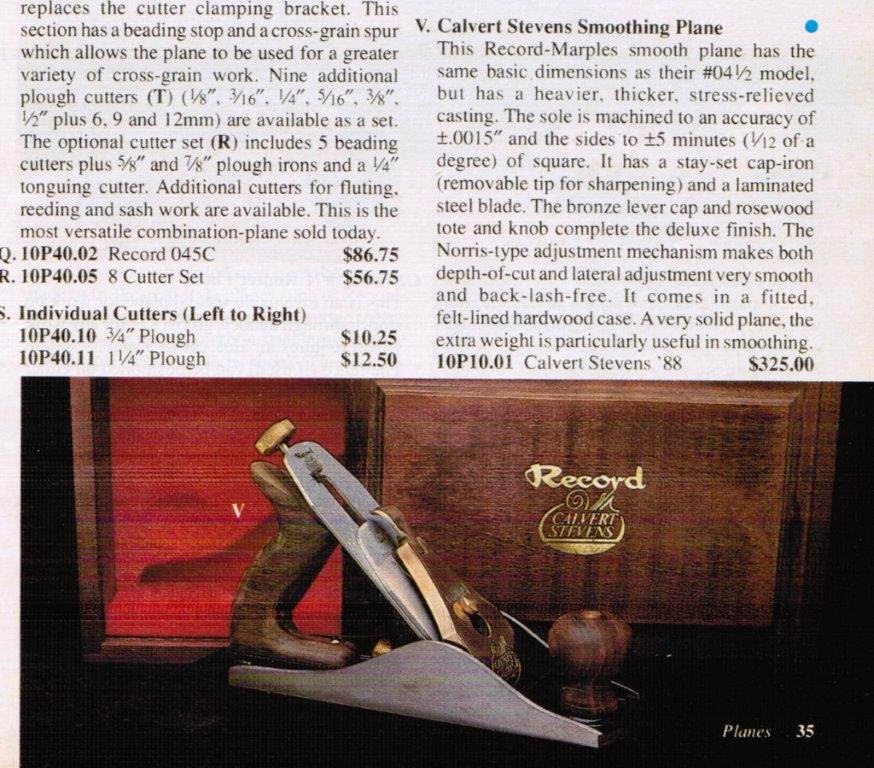 Earlier Lee Valley introduced their first plane into the foray, called the Paragon line, it was also short lived and bear strong resemblance to Record planes, and was made in England to their specifications, humm coincidences? :-) 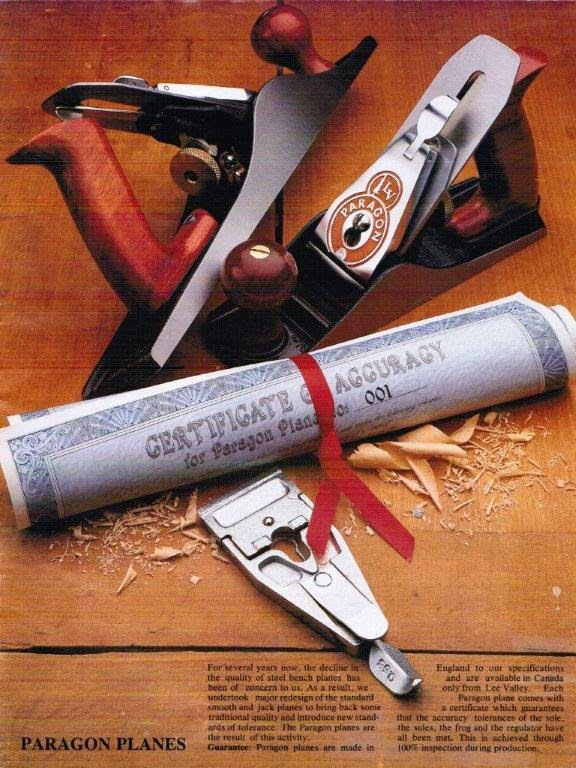 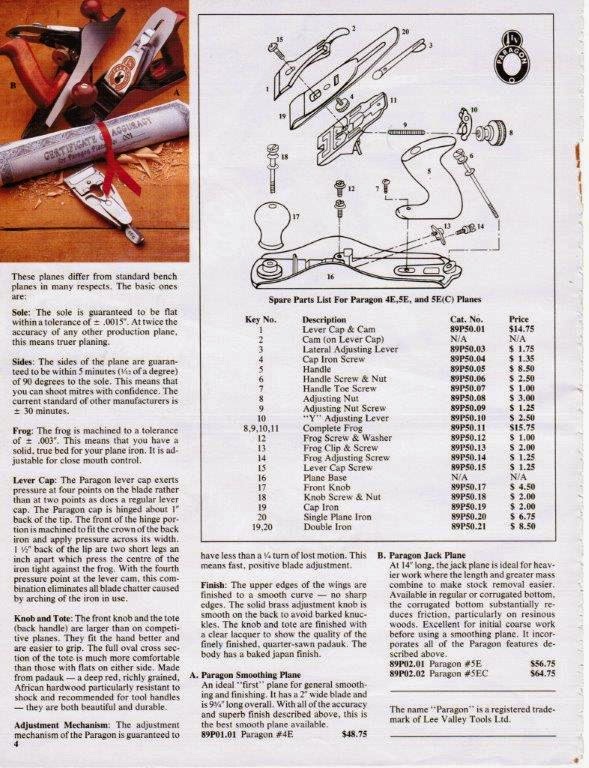 
Years after Veritas would return into the plane field with their in-house designed smoothing planes based on the MF Buck Rogers plane.

Record made many cast iron tools which were dead give away copies of Stanley patterns, but they did came up with their own innovations, besides prefixing their models numbers with a leading zero in front of the equivalent Stanley plane numbers E.I Stanley No 4 became Record No 04 and etc.
Perhaps one of their best improvements on Stanley design, came on the Duplex rabbet No 78. 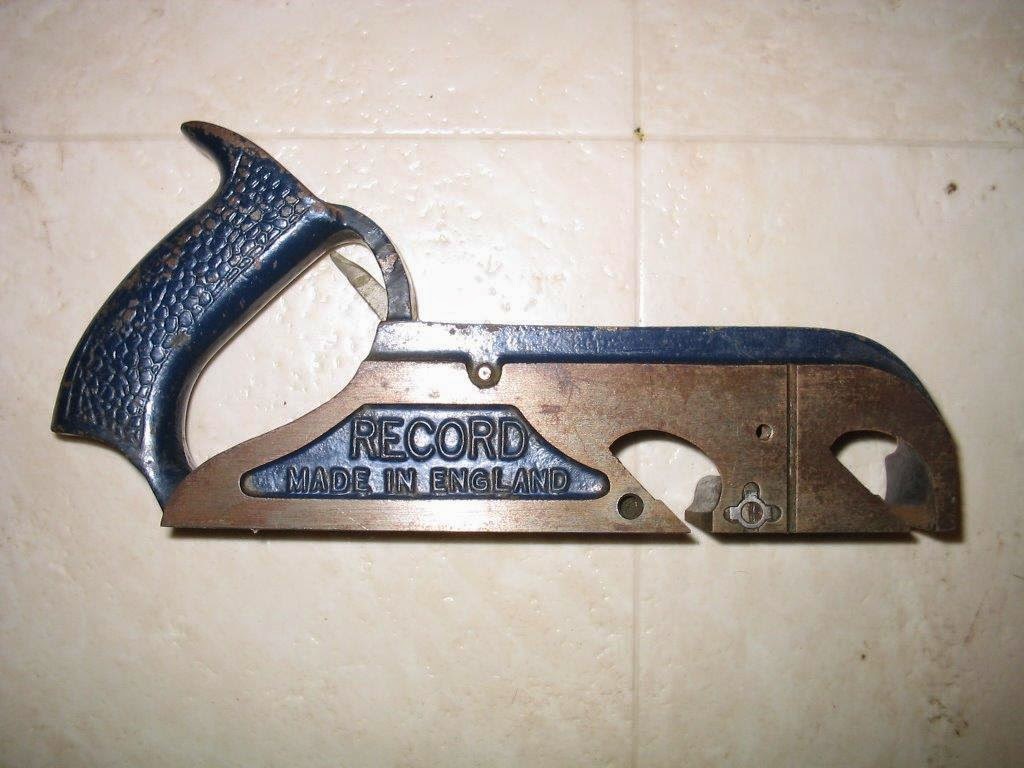 Record Duplex Rabbet Fillister plane No 078
Found Just the body, I'm missing, the blade, the lever cap, the fence & rod, depth stop.
But I can fit all these missing parts borrowed from my Stanley No 78.

They started making a straight copy, the no 078, but thru acquisitions, came upon the improved No W78 from Woden
For the No 778 history see WS Birmingham tools and after they sold that tool line to Woden in 1952 which in turn was acquired by Record in 1961. 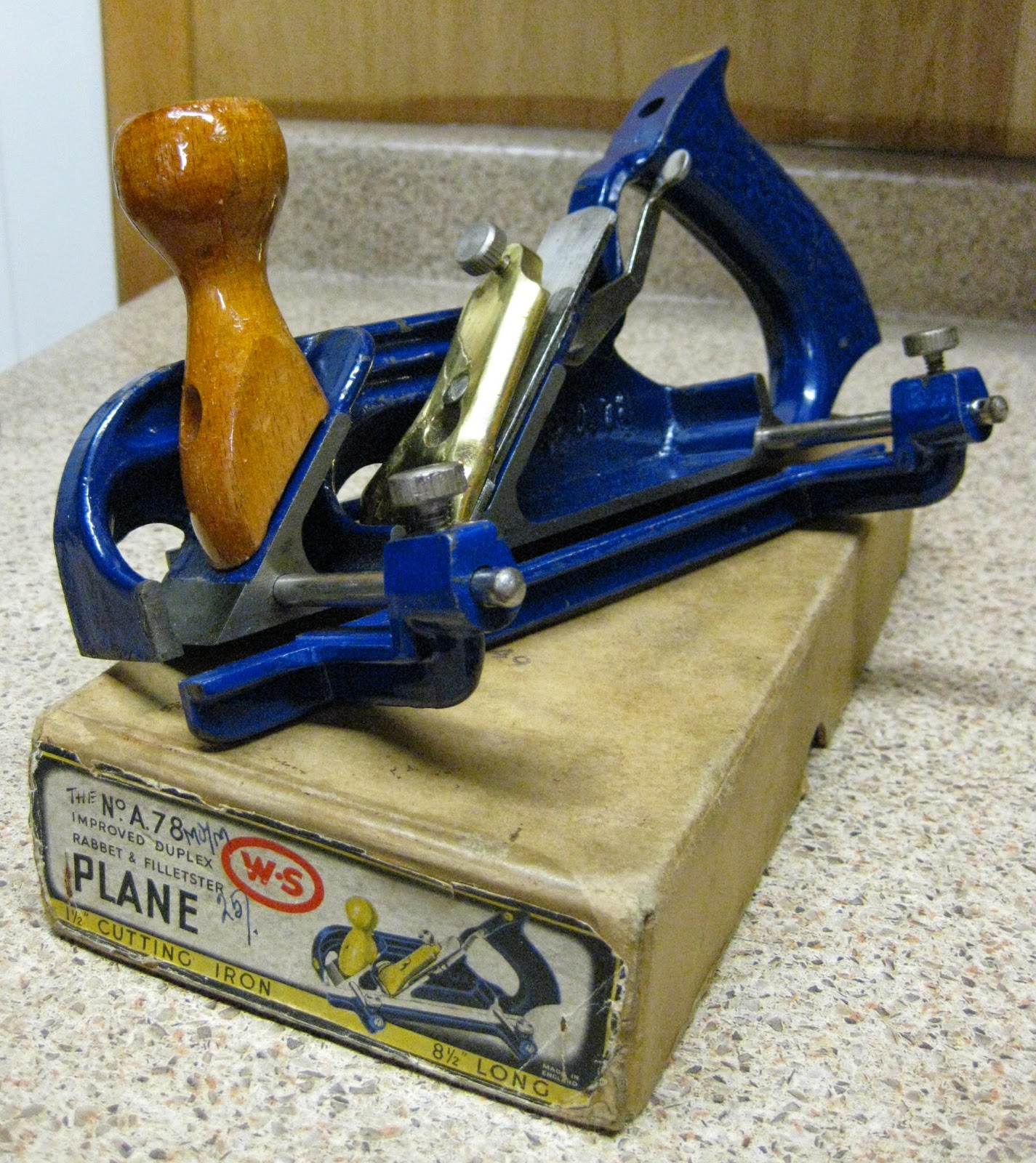 WS Birmingham No A78 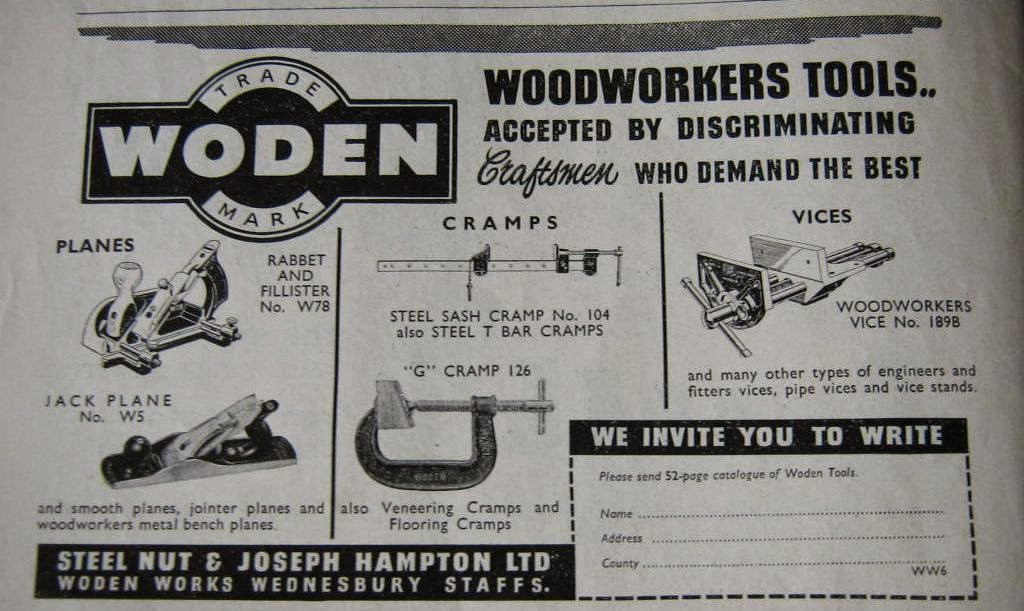 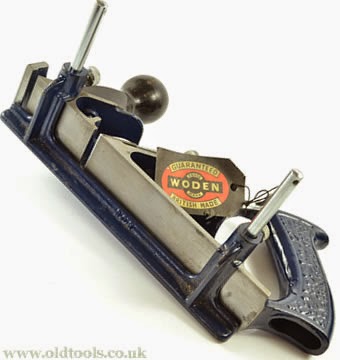 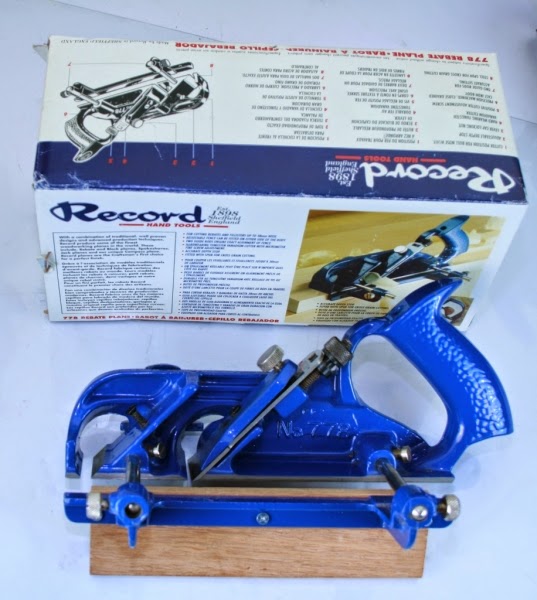 The latest incarnation Record 778.
Note that the previous model had a removable wood knob up front, Record dropped that feature.

If you ever used a Stanley No 78, you know how frustrating the fence can be to lock down securely Darn near impossible even if you torque down the nut with pliers, all you are going to do, is damages the tool.
The No 778 on the other hand, uses two rods to secure the fence solidly and square to the plane body, simple but very effective!
This Record plane is no longer manufactured but modern copies exist, such as the Anant (India) and Faithful (UK) Review of Faithful copy. They are not machined to the same Record standard.

The brand Record, still exist today, but under the Irwin banner, and is in no way close to the quality of the Made in England tools of long ago. Similar fate happened to Stanley, they offshored most everything to the lowest bidders, sad!

To find more about Record tools visit Record handplanes and Record planes and you will also find types studies to help you dated your Record tools.
And finally find some real tool reviews of these older Record classics planes at Record planes review