Since I had the USB microscope at my desk, I played a bit with it, it's so much fun :-)

I thought I shared with you some of the methods I used to uncover markings on tools, besides my calibrated (when wearing glasses) Mark 1 Eyeballs.
Seriously being very near sighted, I see better and bigger without glasses but only up close.

For many years, markings were stamped, even on saw plates before they switched to an acid etch.
Problem always been, some of these markings were faint to start with, because of a worn out stamp or just not struck properly.  Add about a hundred years or so of uses and abuses and some of these markings practically faded away, being abraded or, HORROR, on moulding planes had their nose cut off an inch or so to store them with the remainder of the herd which got standardized to 9-1/2 inch later on.  That meant chopping off 1/2 in or a good inch :-(

And to add even more with the difficulties of reading them, metal rusted and wood get abraded or worn by repeat handling.

I used all the following tricks to help me out uncover markings.

One of the oldest trick in plane collecting is to used Talcum powder to enhance the contrast of the stamping against the darker colored wood.  Take a pic, turned it into a black and white pic, clean up the pic a bit and you have the classic markings imprints you often see in books 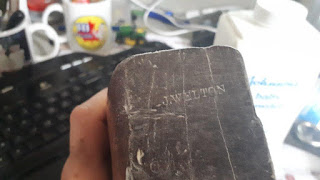 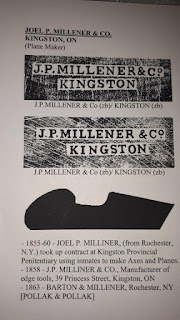 There are of course a few ways to take pics, a camera (preferably digital), the camera in your phone and the scanner... YES, your scanner 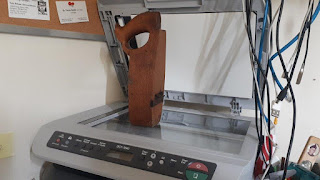 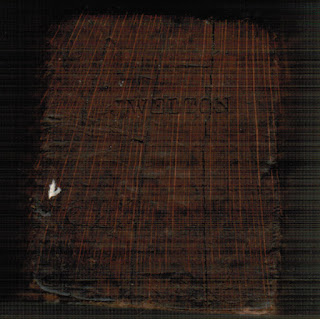 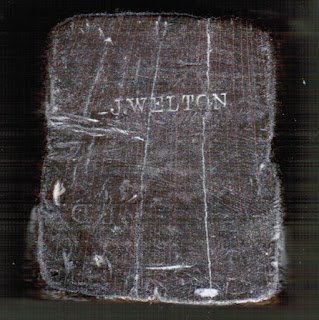 Talcum enhanced
Both scanned in the scanner 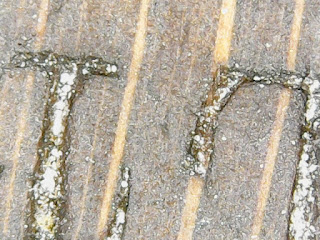 The remnants of the powder afterward.  Will easily washed away.
Pic from USB microscope 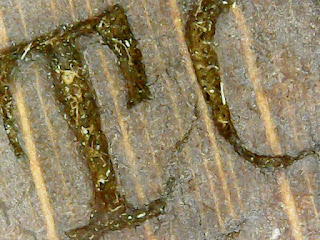 The letters before the talcum powder 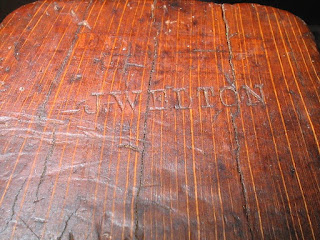 You can see a faint depression where the makers stamp should be.
J. Welton being the owner stamp.
Having a hard time getting it to stand out. Start with a "B" or "H"  I believe.
It is in two lines BTW

Talking of whom, the gentleman J, Welton grew up and lived on my street back when we were living in Tremont NS.  He passed long before we bought a house on his street, but his house was still own by Weltons.
I got these by attending the Welton's house estate when the last one passed.  There was a serious tool collector in attendance and he quickly overbid me several times.  I got the crumbs ... But I was happy to get some.

There is a small cemetery at the end of my street I went to it to look up his tombstone to make some pencil rubbing on paper.  It started to rain when I was doing that but it did not curbed my enthusiastic research, I just went back home to fetch my special note pad paper which let you write in the rain :-)

Once you have a digitized picture you can manipulated it to enhance or reduce light, contrast, colors etc.  No special software required, I simply used MS Paint and Window pictures.
Yes, you could tweaked it even more and probably better using specialized software such as Photoshop Elements ($$) or Gimp (free download) 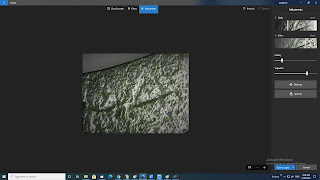 That piece was recently de-rusted Evaporust, wire wheel, Autosol etc
I simply used the built in photo editor in Windows 10
You can clearly see 94 in this pic.
Recognize the piece in question? 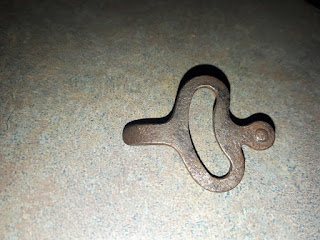 That is the mouth adjusting lever on my No 19 Excelsior Block plane.
Being an easily removable part, it can be swapped
Shown prior to de-rusting. Nickel plated flaking off and rusty 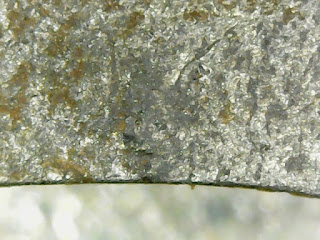 In a previous USB microscope view I thought I saw a 94??
And sure enough that would be part of the patent date
PAT. FEB. 20. 94. 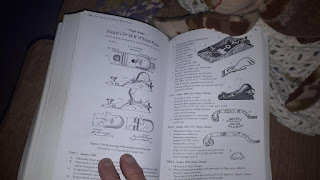 Proving my lever is original to the Type 3  I have.

The real tricky part is the lighting.  How much light and from what angle will obscure or reveal small indentations.  That "94" for example, I had to really tilted the microscope around and varies the light to get it.  And even after all that, by varying some parameters with the software made it stand out even more.  Pretty sophisticated and inexpensive method for uncovering markings if you ask me.

Part of the success is knowing where to expect to find markings.
On wooden planes, the maker stamp will more than often be found stamped in the nose of the plane (its front), sometimes along with its Model No 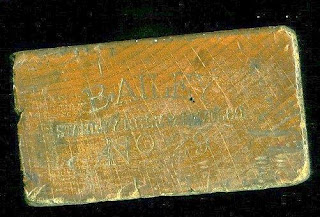 BAILEY
STANLEY LEVEL & RULE Co.
No 29
Image from my scanner, and yes it is a Fore plane 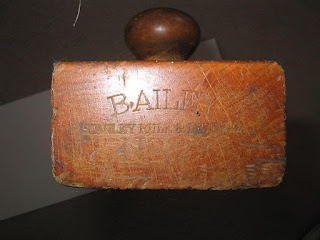 Versus picture from camera.
You get a more even illumination from the scanner
which makes it easier to manipulate later. 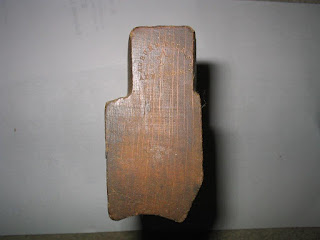 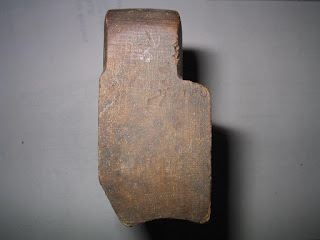 On braces, you will often see the stamping's, Makers and Model No on the upper arm of the bow. 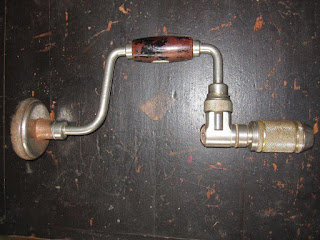 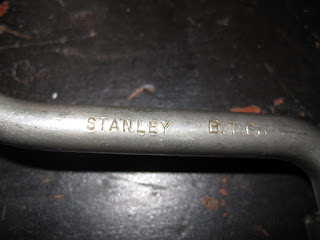 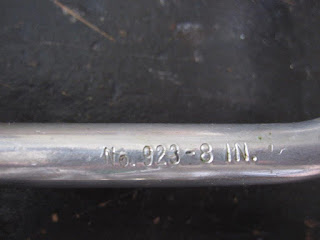 Brace bits have their sizes (No 4 to 16) stamped on their tapered butt, while the makers would be between the butt and the start of the twist, cutting edge etc.  Look for it nearer the butt end.
It never cease to amazed me what Evaporust has revealed to me thru the years. 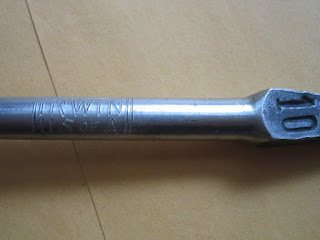 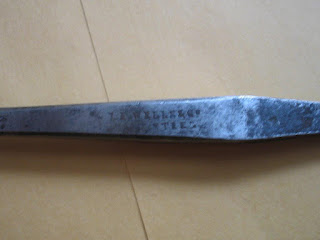 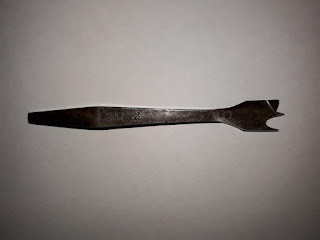 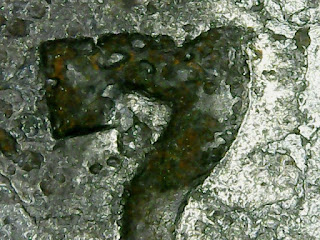 The Number 7 size under the microscope 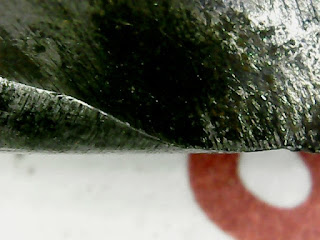 It is a twist nose bit 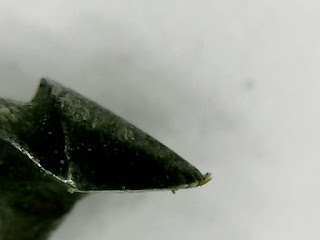 The business end. The thing at the end is a bit of wood left
Its a working bit :-)

Plane blades have their maker's marking clearly (?) stamped near the top.
But they are often obscured in rust.  Evaporust is a god sent in those cases since it only dissolved the rust, will not attack the good metal. 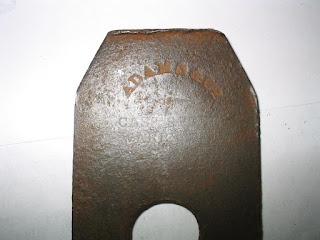 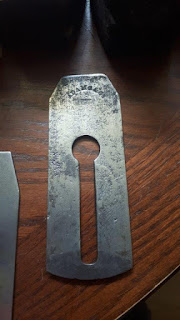 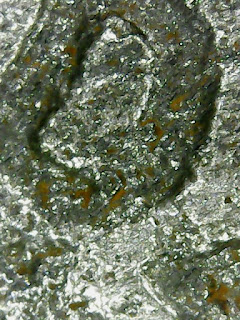 Close up on the DA in ADAM. 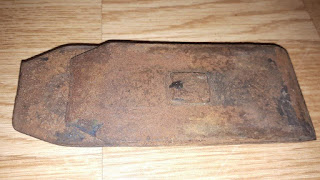 Hard to see but you can somewhat discerned the arched logo 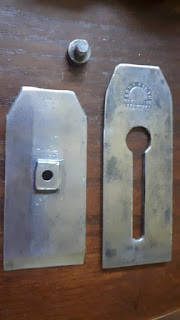 I could go on and on, but to be successful you only required two things.
A cleaned object, de-rusted and some prior knowledge of where you would expect to find markings.
After that the method you used is up to you, personally I am sold to the digital domain.  Much easier than the old pencil rubbing's on paper and talcum powder enhanced prints.

Bob, with a seemingly accumulating pile of tools around his PC, Oups :-)
Posted by Valley Woodworker at 6:08 PM