Lately, I'm overdue to even go close to the shop, but somehow, I just can't do it...

So the other day, when a friend ask me for some help replacing his water heater, I said, sure... (could uses the distractions) :-) 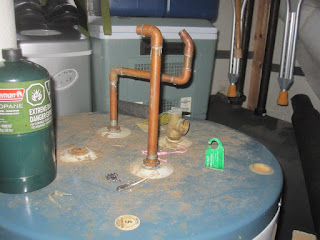 The older one, removed.
There was a mess of elbows on it to connect to the water lines! 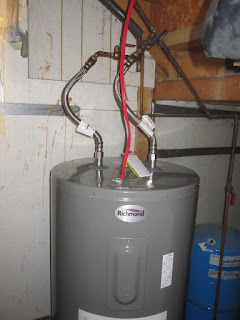 Redid the hot water line from the T, added a valve and a 45 degrees elbow
to match the other side. Only had to add a thread adapter on the cold side.
Flex lines, stainless braided, will not burst, connect the water tank to the house plumbing. Next swap would be a breeze. (Within 10 years)

Did not trusted the wiring in place, the line (14/3) was coming from a light fixture ceiling box...??? 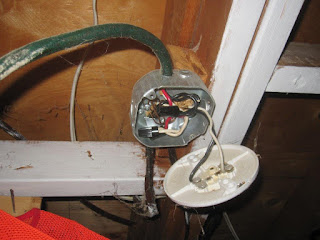 Are you kidding me??
Green wire coming out on top is the 220V line to the water heater. 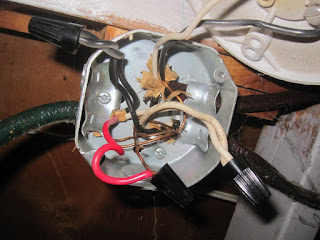 What we have is the switched 120V power from the light switch to the bulb and a dedicated (?) 240V line spliced inside same light junction box.
That is a big No-No. They even tied the red to ground??

When we pulled the fuse block (service entrance is the older fuse panel) for the water heater, there was some serious overheating damages to it and on one of the fuse itself (Discolored metal, Bakelite crumbling).
Something went very wrong and was probably over fused... Cannot read the fuse rating on the discolored ones.

Had a look at where the old water heater leaked.  Normally they always go on the bottom, caused by rust.  Not that one!! 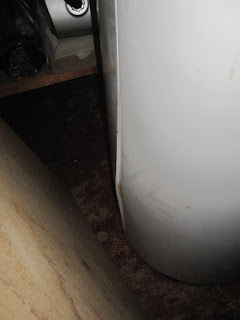 It bursted at the seam...
In theory, the safety valve is supposed to avoid pressure build up inside.
Somehow, that one bursted... Could had been much worse...

They were lucky, it could have caused a catastrophic water failure and it very well could had caused a electrical fire.

In theory, we are supposed to once a year, flush the sediment from the bottom of the tank, to avoid early rust failures. And test the safety valve to ensure it is not stuck closed. But honestly, who of us do that every year....
At best I do mine once in a while, but at  least, it does get flushed and the valve exercised... once in a while.

Service life of these electric water heater is usually less than 10 years, hence why when you buy a house in Canada, if the water heater tank or the oil tank, if present... They must be less than 10 years old in order for your insurer to insured your house.  Of course if you never sell your house, you may very well end up with the actual one until failure, whenever that is...

Bob, the age old maintainer, whose water heater is coming to the end of his service life...sigh!

In our recent discussions between Ralph and I about sharpening, I often mentioned the importance of tweaking the edge with a micro bevel if the edge seems to crumble too fast for a given wood. He mentioned on numerous occasions that he never saw any references to that in older text, so what gives?

So here is my take on this.
There always was, it just wasn't called micro bevels like we do today...

Let me try to explain this. 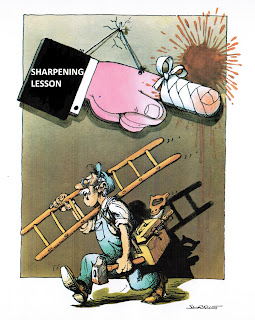 Every text I ever read about sharpening always makes mention of two angles;
The grinding angle and the whetting angle. 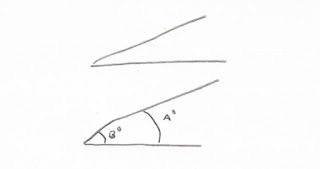 Top the primary or grinding angle, need to be shallow.
Bottom, angle A is the primary, B is the secondary.
You want to add a third one? Be my guess, but its not necessary...

So what are they and why bother with two angles??

You need a shallow angle to penetrate easily into the wood. That shallow angle is referred to as the primary bevel or the grinding angle. It is usually between 20 and 30 degrees, as seen in older text. Today we seems to favored 25 degrees (smack in the middle).
If you are using a chisel for paring, 20 would be fine, but it would crumble pretty quick if you were chopping mortise.

Nobody really likes to spend too much time sharpening, we all rather spend our time actually working wood.

The next angle is the secondary angle or referred to as the whetting angle in older text. That is the angle that we use on our stones after the grinding operation. Which grinding is usually done on a mechanical or electrical grinder, but I do mine on stones as well, as I am not a big fan of a hollow edge, produced by a round wheel. A bigger wheel will give you a shallower hollow, but it is still there.

Why that second angle? Because if will significantly reduced the time required to sharpen, since we are not doing the whole bevel again, AND perhaps more importantly, it will beefed up the edge (more metal behind the edge)

That small land of steel at a higher angle makes a lot of difference for the edge retention, but it is too small to make much of an effect on how the tool feels into the wood. If you were not adding that small secondary bevel and instead were to sharpen two chisels, one at 25 the other at 30, you will find a  difference in how it penetrate the wood. Now touch up that 25 degrees by adding a 30 degrees micro bevel and compare it to the other still at 30. The one with the whole edge at 30 will be harder to push still than the one with the micro bevel of 30.

I know some would argue that what we call micro bevel today are really a tertiary bevel (3rd one) but to me that is semantic.
I do my edge usually at 25 then tweak the edge by whatever work for the wood I'm working with. The exact angle?  Don't know don't care!

What does that mean? If my edge is crumbling too fast, I'll simply touch up the edge with a steeper secondary bevel.
I do strop my edges often as I work, an habit I picked up from my carving days.
It keep my edge sharp longer and delay the inevitable trip back to the stones...

Other than that, that is all I do.
Oh, I do the back first real good the first time around (past pitting at the edge), then...
i'll just continue to polish it to remove the small burr introduced by whetting.

I do not care to take my edge to a blinding shine level, I stop at my finest stone, a 6000 grit waterstone, and I most certainly do not test my edges on any of my body parts. Nail, hair on my arms etc, paper or whatever (those test proves nothing, except that you are about to cut yourself and probably damaged that edge :-)

I'll have you know on good authority that blood cause rust on tools, so clean up immediately, save the tool, don't worry about your body parts, i'll grow back right? 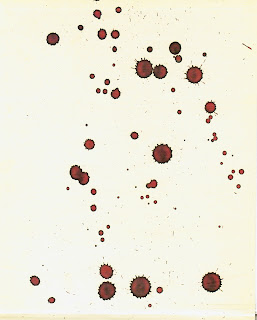 I simply look at the edge under a strong lite trying to catch reflections and I test the actual edge on a scrap piece of pine. 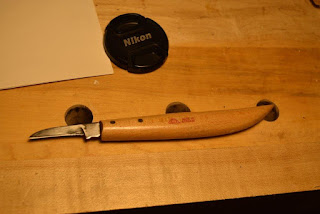 My all times favourite knife.
German chip knife No 8
Bought that knife in 1998, has been sharpened a bazillions times by now... 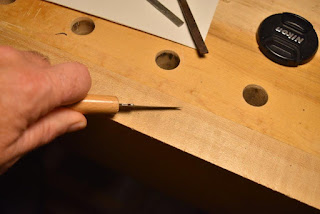 Can you tell if its sharp or not? 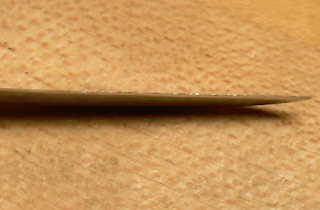 Same picture, blown up.
See the white bright white spots on the edge??
These means that there is sufficient thickness to reflect light,
it is overdue for sharpening :-)


Why pine? Being a softwood, the end grain crumble easily if the edge is not properly sharpen.
Once I got a shiny burnished surface left on the end grain cuts, I am done! 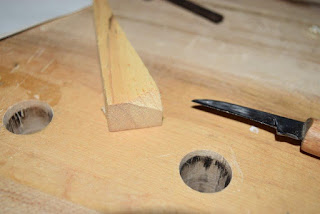 First cut with nicked edge shown above.
Cut easily still, but look at the scratches left 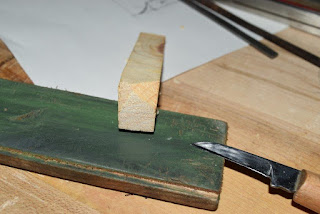 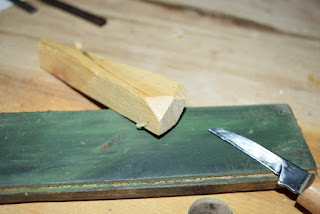 A few more strokes followed by stropping.
Pretty good, it is leaving a burnished surface


BUT... I will tweak that edge depending on how it react to the wood I am working on, by raising the edge a tad. Whetting angle, secondary bevel, micro bevel, whatever you want to called it... 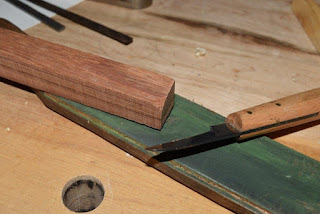 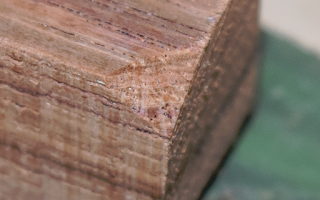 Look at the clean pore holes, cuts are shiny, burnished

AND I do not put any back bevels what so ever on my edges thank you very much... Not on my plane irons, and never on my chisels.
I may be lazy but never that lazy (ruler trick) ... :-)

Bob, sharpening his keyboard with help from Rudy. 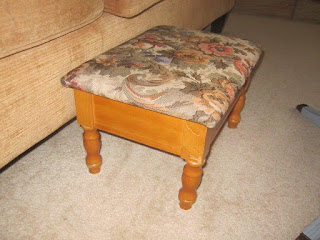 That is his little stool to go up on the couch.
Its starting to shows some signs of puppy chew...

We have discussed many times getting a small companion dog, but I have always resisted since our retirement plans always involved travelling abroad and it would be easier not having any attachments at home to worry about. 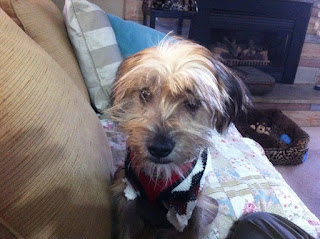 Since 2002 we had no ties at home, the dog passed on, the cat and the kids left home etc, for the first time in our lives we could go anywhere on moment notice.

At the time she was quite involved with African Violets societies and we traveled around the US and Canada to convention and shows, she entered plants wherever we went (travelling with show plants is quite something!)

Years ago we did not needed a passport to go visit the States, I just show my military ID and leave pass. Once we were going down to NY State were she was invited to judge. I shown my typical identification, told the border agent I was a Warrant Officer and my wife was a judge... Didn't finished my sentence he gave me back my papers, saluted and said have a nice trip your honor... As we were driving away, I told her, I don't think he understood what I was trying to say :-)

Due to her illness she pretty well given up on her African Violets but we are still tentatively planing to go to the next AVSC convention in Calgary next spring.

Well those travelling plans in our retirement years are pretty well on the back burner and realistically may never happened so...

She wanted a small dog companion, how am I to say no to her.
She could ask for the moon and I would get it for her....
So yesterday we went to an interview and meet her chosen puppy for the first time, and would you know it, it follow her home :-) 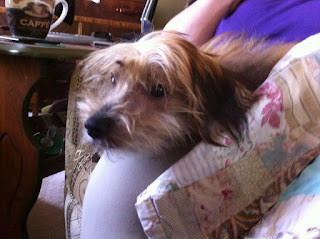 A small detour to the pet store and a visit to our friend's Blue Bell, she jokingly told Rudy she was taking him to see his older girlfriend :-) 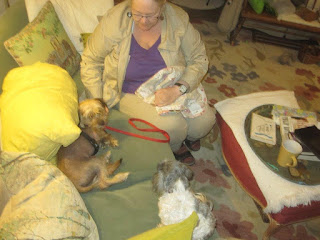 They got along fine, he is well mannered and calm and not a barking dog, bonus.

Rudy is a Chinese crested powder puffed dog  the nearly perfect dog for his intended purpose, be a constant companion to Heather till the end. Heather with our friend's Blue Bell

Of course I had to be on board with it since I'm the one who would likely be around the longest with him. Have no fear, we bonded rather quickly :-)
He would becomes my next shop dog. I doubted he will ever be able to carry 2X4 around the shop like Jake did (Bearded Collie) which is OK with me since I now have a smaller shop :-) Jake was a herding dog who like to herd everything in piles, wood included :-) 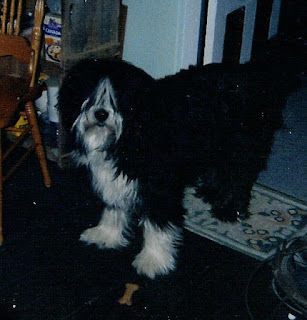 Jake our faithful companion of 15 years

So now I better puppy proof my shop and make sure he does not chew my wood supplies or tools :-) 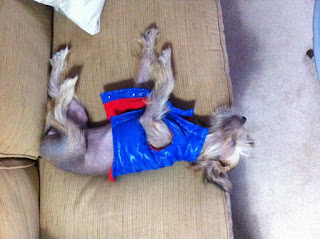 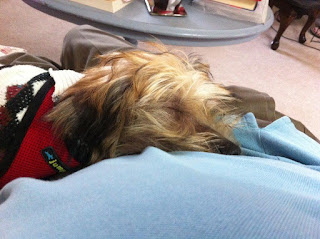