I try to keep on top of the questions left on comments, but sometimes they quickly get buried before I see them...

This is in response to such a question a commenter left in Nov 17.
What are the differences between the Stanley Mitre Boxes 358, 2358, A, B etc

I wrote previously about Mitre Boxes Part 1 The boxes and Part 2 The saws
Which currently stands at the second place for most reads at 4317 (part 2), who knew Miter Boxes were so popular... 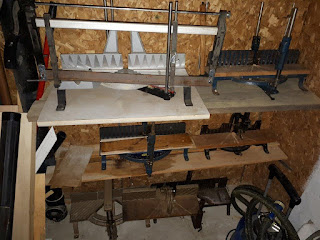 If there was "one" problem with researching tools
is that you end up with a few specimens... :-)

But this question is about the various Stanley's Mitre Box (MB) that came and went thru the years. I can so understand the confusion trying to navigate your way thru it, some models came and went, while others soldiered on until 1984.

Which beg the question, why so many models???
The answer to this are two fold: One - They have a range of various capacities and Two - At various price points in order to sell a MB to anyone looking for one.
Remember Stanley Motto: The Tool box of the world... They were on a quest to become Tool maker's to the world, with a product for everyone at every price points.

Today Electrons spinning mitre saws are seemingly designed to be made Cheaper, Faster, Noiser, Scream Louder and Spew saw dust everywhere...
Ahhh, the quietness of using a good old Mitre Box  without having to wear a dust mask or ears defenders... Bonus !! But I digress :-)

Stanley still makes MBs, but at nowhere near the quality and precision of the older models. The 20-600, plastic old school MB with a short backsaw. 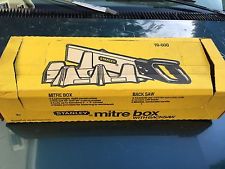 This is the slightly older No 19-600.
Same crappy plastic handled, too short backsaw
Pic from Ebay

Way too short BTW, you are nibbling away, the teeth cannot clear the kerf to expelled the sawdust Tst Tst... Just goes to show, they seems to forgot what they once knew :-(
And the, yet another variation of the frame saw MBs, No 20-800, such as the Nobex, but also nowhere near the quality and precision, helas... 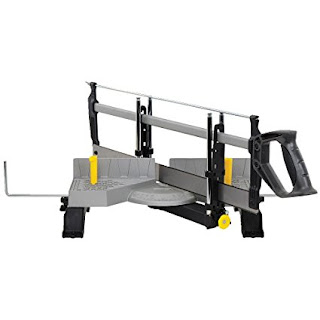 No 20-800
Most everything is plastic, with the exception of
course of the reversible, induction hardened tooth blade :-)
Pic from Stanley Tools

For this entry we will concentrated on the various quality MBs they made thru the years, from 1876 to 1984. 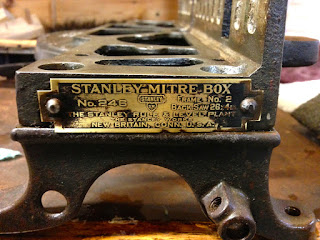 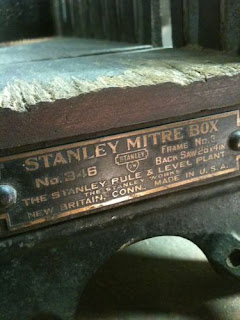 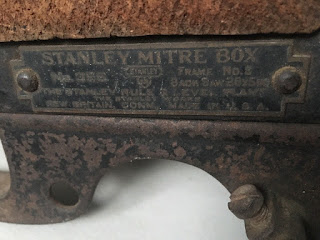 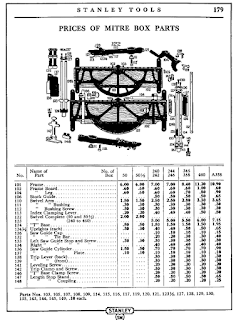 You can clearly see the different size of two frames types.
Which ones? I do not know, they just illustrated two sizes,
while listing up to 4 different frame sizes (as per model Nos shown).

Note, the Model No tag plate location changed thru the years. In the above pics it was on the RH side of the box frame. These 3 pics are all "Sweet Heart". 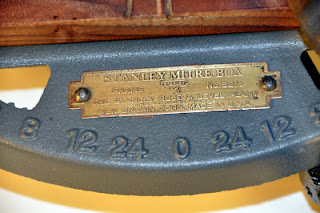 and if you tought that was only because it was from the Victor line up... 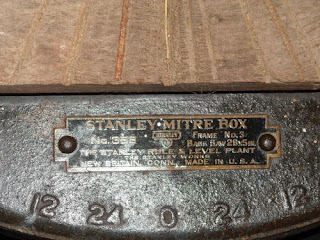 This is also were you would find the patents Nos cast into the tool, up front by the angle indicator, on the earliest models. 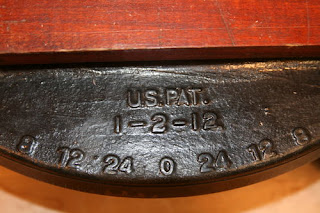 Front dial on a No 246, featuring a Pat No date.
Notice the orangy colour of the replaceable wood board.
Stanley used this stain's colour scheme for a very long time.
If your box has a plain "whitish board" it is probably a replacement
Pic from Ebay 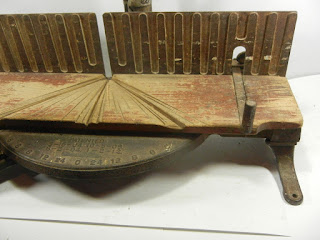 This older No 346 has more Patents on it
Same location. See Pats listing at the end of this entry.
This badly chewed up original board (stained) badly need replacement
Pic from Ebay

Something else to know is that they used the suffix A to denoted their first Aluminum model and the Suffix M indicated a Metal cutting MB. With two exceptions, the No 109 and No 2360 were metal cutting MBs but they never sported the suffix M. Confused yet? Lets try another riddle...
Is the 358 same as the 2358? Nope, and they co-existed for a while... 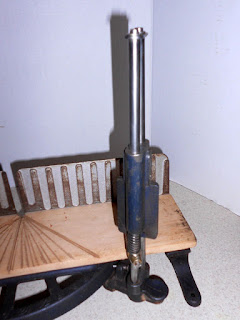 The flat part in question, look like flat wings
No 60-1/2, early model
Pic from Ebay 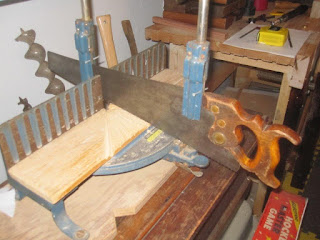 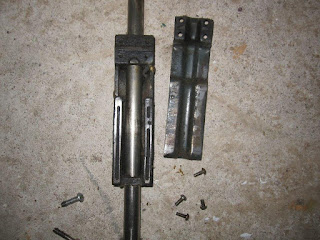 A look inside one of the saw guide on my late No 60.
NO bearings, friction fit plates. Notice the groove in one part?
Put in a small amount of lubricant in there, I used a dry grease or wax.
The top part recess capture the saw's back spline

They may have been lower priced and did not had all the bells and whistles of their other line up, but they are very good MBs. The later models, except No 50,  had cast aluminum frame enameled blue instead of the earliest Black japanned cast iron frames. Regardless of colour found, their weight difference is a tell all.

These remaining models were the professional models, which range from the 240, a 20X4 inch backsaw to the monster 460, which was their top of the line and had a 30X6 inch backsaw and weigh in at 51 pounds with the saw...!!
I would not called that portable !! 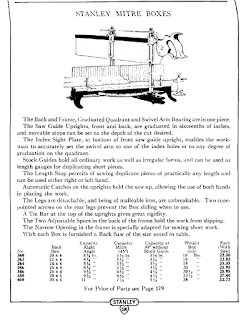 This series, being all similar except for the various capacities, all featured the top crossbar betwen the front and rear posts, 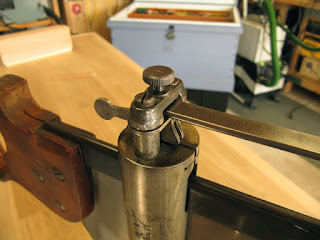 Typical attachment on top of posts for crossbar
Pic from Lumberjock

and the little, often MIA, trip lever attached to the backsaw spline with a thumb screw to release the front guide on the post when pushed in. (missing in above pic)  This action drop the saw down at an angle which release the back post guide. See it in action here  as demonstrated by Ron Herman

Introduced in 1932, the 2xxx's series, bearing familiar Nos such as 244, 358 etc in their number, were modified guide post and saw guides series of the older ones. They features rollers bearings in the saw guides. Probably to keep up with Millers-Falls models which features roller bearings in some of their Langdon saw guides.  Note that they were available for a time along with the originals 244, 246 and 358. These redesigned saw guides look a lot like the ones used in the Millers-Falls, go figure... 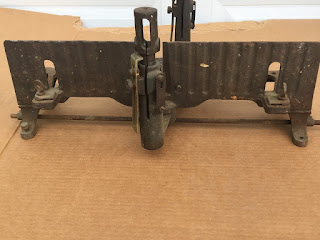 Redesigned saw post and guides  on the 2xxx's series.
This is a No 2246 from the back
Pic from Ebay 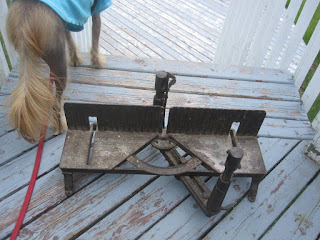 Notice the "Ahem" similar looking post
on this older MF Langdon No 24.
Rudy in pic for scale :-)

Gone is the top crossbar keeping both front and rear post connected. These became the "new" flagship line of MBs while some of the original series such as the 244 soldiered on alongside until 1967 and the 246 until 1984
So, short answer: NO a 2358 is not a 358 simply renumbered. 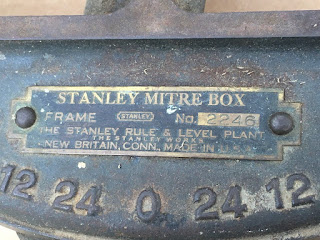 Tag on the No 2246. Always (?) located up front on this series.
Notice the frame No is the model No.
Used same tag plate on all models
with the applicable frame, AKA model Nos
Pic from Ebay

Often missing parts and some solutions

Good news is, there is nothing too critical about it and can be easily made or replaced using a simple file folder hanger bar, such as this 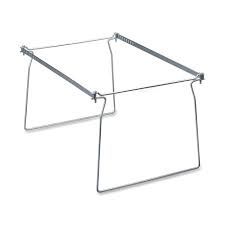 The two bars on the sides are just about the right sizes.
And NO, I cannot take credit for this idea, found that on line on some forum.

Or armed with measurements you can make your own.  This link also shows you the two clamps types that secured it. Of course, the various sizes of frames required a different lenght.

These are the two (2) guide that help holding the stock on the bed. Often used for holding the stock at various angles for cutting trim and crown moulding for example, eliminating the complex compound angle that would otherwise be required.  The good news is, there is nothing too complicated about it, and replacement can be easily made. You need a piece of flat stock and a smaller piece of round stock to make these. Drill a hole in the bottom of the round stock, tap for a screw. To recessed the screw head, used a tapered head screw with a corresponding countersink hole in the bar. 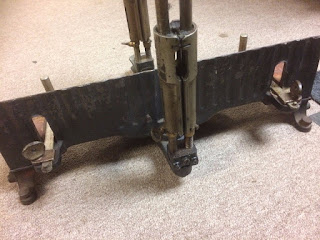 How they attach in the back on this No 244.
Notice a small detail missing on the above reproduction?
There is a small round piece sticking out at the end
to prevent pulling out the bar.
Pic from Ebay

And of course, you will need a corresponding slot cut into the wooden flat bed, if you replaced it, like you probably had to do because the wooden beds are often found chew up. For which there was really never any good reasons, if you just take the time to properly adjusted the depth stops Tst... Tst...

There are four (4) small depth stop collars, two (2) on the front guide, two (2) on the back guide, which when correctly adjusted and used, prevents you from cutting into the wooden bed board.
One set is used to prevent the saw from chewing the board, the other set is for setting up stop cuts. Since they are yet another small part, removeable (because they are adjustable) they have been known to grow legs of their own....
Nothing too fancy, a round collar with a set screw to secured it would do.
Only complication would be finding such a collar of the required size ?

Note that they changed construction type thru the years. 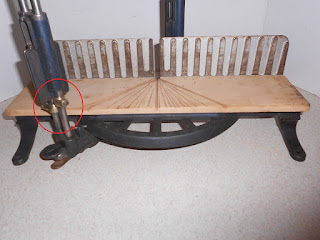 Older No 60-1/2, the stops are cast metal with a nib sticking out
for the locking screw. 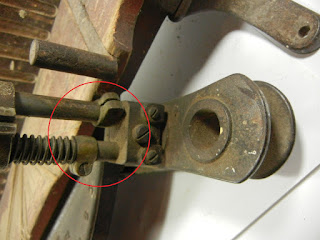 On this later No 346, they now used a simpler split cast part,
pinched by a screw to secure it 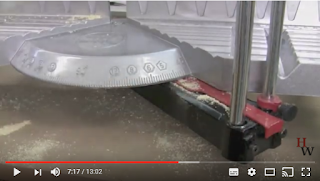 A simple round collar (red part) , such as used on the Nobex,
would work just as good. 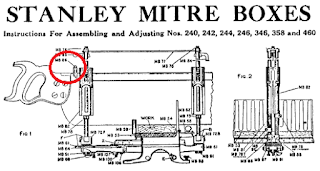 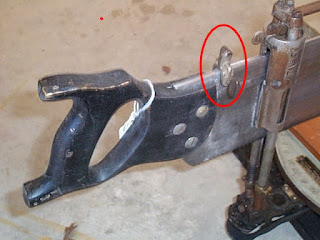 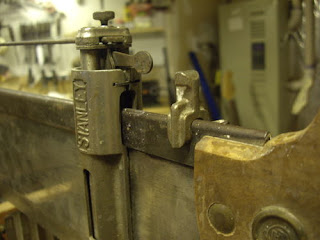 Here is a better view of it
Pic from Lumberjock

This is the small cast part that release the saw holding bracket up front when the saw is pushed forward. There used to be a reproduction of that part available years ago, I do not know if they are still available and from where??
Being removeable and the saws often separated from the mitre boxes, it is most often MIA.
YES, you can still used your MB without it, just as you have to do on the No 60, it just makes it a bit easier, IE no need to touch the catch brackets, it does it all for you. So missing it is no deal killer, but it should be reflected in the price. Looking for one? Take a number and join the cue...

The 240s series, 346, 358, 360 and 460 all sported a pointed tapered tip screw in the rear holes of the foot brackets.
That was to "grip" the MB to the surface and more importantly, to correct an out of square, level playing field... so to speak :-)
Of course, being adjustable (screw in/out) and having to removed them in order to simply screw the MB to a flat piece of stock (reccomended) they often long parted with the MB... 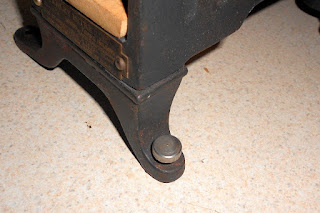 Levelling screw on an older model No 60-1/2.
The clear colour of the top board is clearly a replacement
Pic from Ebay 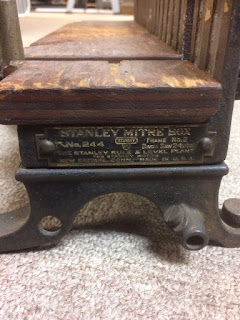 Levelling screw on No 244
Pic from Ebay

Don't know what size or thread they used, but I suspect some typical odd ball Stanley thread. As just explained, not a big deal if missing, but again, should be reflected in the price. Want original parts? Go lined up in the cue.... and good luck  :-) 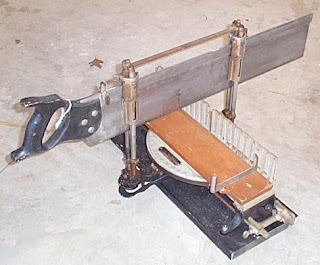 And finally a look at the relevant patents on theses Stanley MBs, linked to the appropriate DATAMP entry were applicable or to the USPTO when not found in DATAMP


And that concludes this rather long explanation for his answer...

Bob, who could probably write a book on these...