The Bob and Rudy travelling zoo is back home

After another 4864 kms of driving.  I was way off in my last trip estimate of 2600 kms, it was more closer to 5K kms like this trip. So Rudy has now traveled almost 10,000 kms within a month. I am impressed how well he travels, that is a big relief. 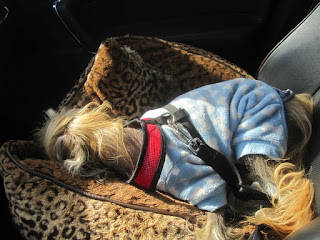 My car got dual temperature zones: I put the A/C on my side, heat on his side with often the seat heat on to warm up his bed faster. 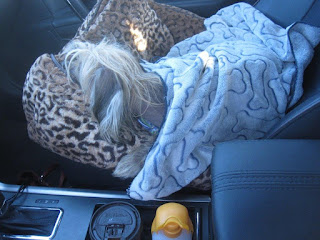 When he is cold he goes under his little blanky

He wear a body harness attached by a swivel to the car seat belt receiver. That turns off the passenger airbag. He is safe and near me, he feels secured :-) 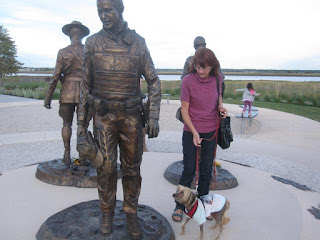 We went to the garden of heroes, were they commemorate the three RCMP officers who were gun down a few years back in Moncton.
Rudy is paying his respect to the K9 officer

He got to saw some of the doggies friends he made on our last trip and met some new ones. 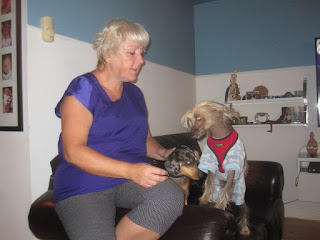 At my brother place; Mary Jane and their dog Slinky with Rudy.
They are both saying, yes we will be good but... :-)

The principal reason for this trip was my friend's reunion in the Forest Montmorency.
It was mostly the same gang that we hosted in Greenwood last year except that more could makes it this time around. Not all of them being retired. 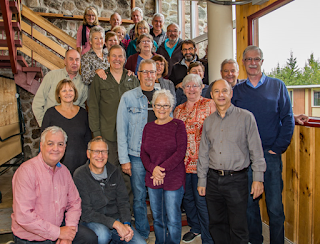 Meet an old friend that I haven't seen in 30 some years,
while we are loosing some more to the dreaded cancer...

Since I was already half way to the Saguenay region, I went to see my friends from our days at 3 Wing Bagotville. Thank you Serge for hosting me and Rudy. 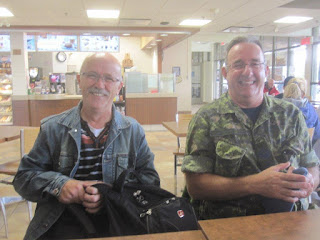 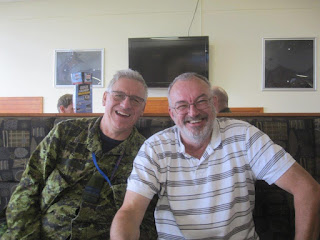 Before and after the reunion, I stayed at my friends Francois and Jacynthe in Quebec city.
Then it was only a few days till the Tool of The Trade show in Pickering, so I hung around the Ottawa region for a few days until the week end. Tried to visit mostly those I missed last time around. Stayed with Sylvie and Jean. Sylvie and I haven't seen each other in over thirty years, it was like we never missed, we just picked up were we left off. The sign of a good friendship. Military service forged many such friendships thru the years, we truly are a band of brothers and sisters.

Stopped overnite in Trenton to see more friends, then off to Ajax at one of Heather cousin, Cory and Eric, that was strategically located very close to the tool show, bonus! :-)
Rudy has always a blast playing with Sunny their dog and Eric.
Took me longer to find a place to park, once arrived at the show, than it took me to drive there from their place!!! 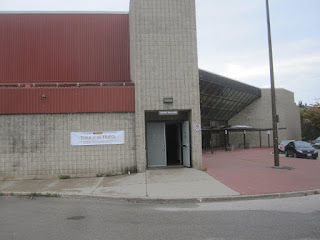 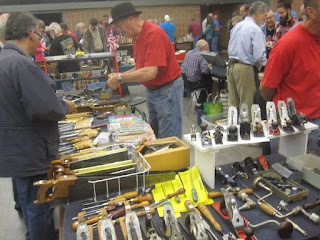 What you find inside, tools galore... 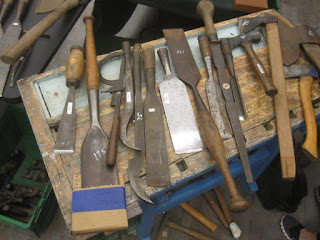 I looked at the slicks, Gerhard but they were a tad pricy... 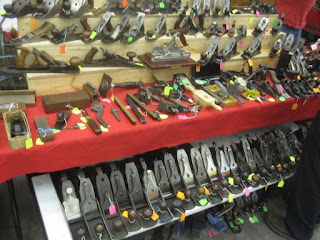 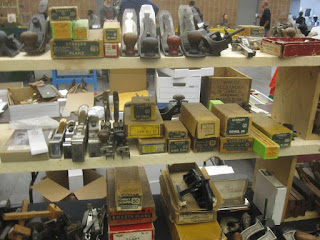 That show is twice a year, Spring and Fall, but I always found the Fall one better for some reasons. It has been a while I been there. As usual it did not disappointed, lots of good tools well priced. Renewed personal contacts with some of my old tool pushers :-) 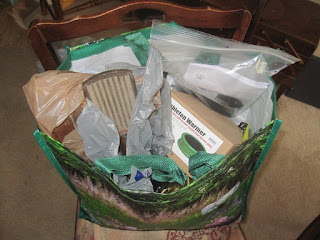 Well OK I bought some, you got me!

I will be covering them in upcoming posts. 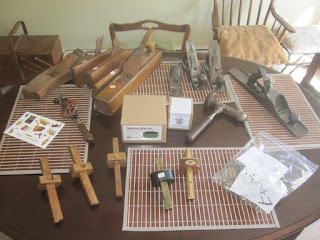 After the show, on my way back I stopped again in Ottawa to attend my former club meeting of the Ottawa Woodworkers Association. It has been a while I attended a meeting since I left in 2006. I was one of the founding members of the association. I bet you I was the only one with a Nova Scotia license plate in the parking lot  :-) 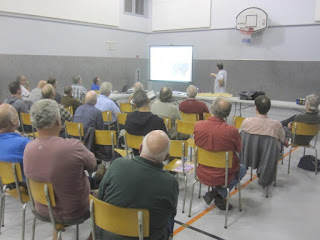 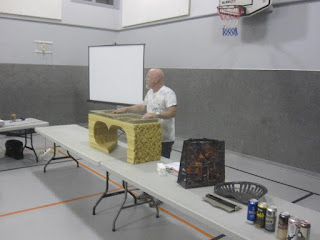 During the Show & Tell portion, a member shown us his unusual love seat 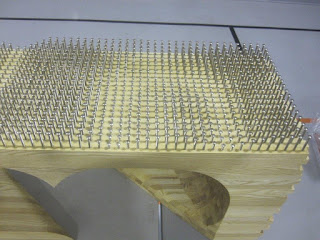 There are literally thousands of screws used,
and they are ALL clocked people! 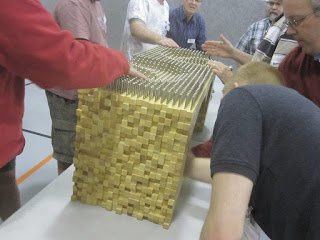 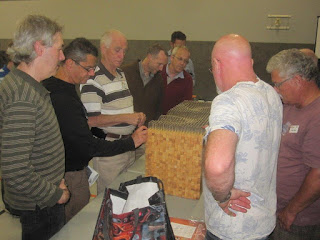 It was quite the star of the nite. Well done, and in case you wondered,
yes it is comfortable to seat in

Oh, also put in my obligatory visits to Lee Valley stores;
The one in Ottawa was having a Festool event, got my food plate :-) 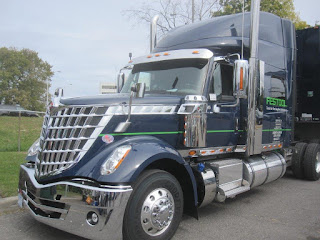 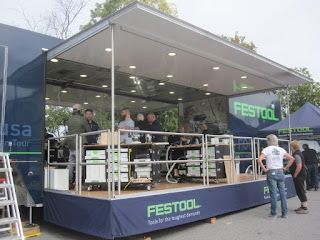 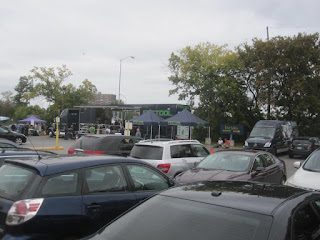 Power tools are not my thing anymore but they sure make nice tools,,,

This time around I remember to brought my small plow plane with me to drop off at the store in Ottawa in order to have it modified. I miss the first time around but they decided to extend that offer until the 10 of Oct... Done.

Visited the new store in Kingston, they were having their 1 year anniversary.
I missed on the cake, I was too late...darn... but I got the coffee :-) 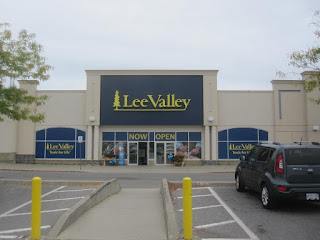 All the LV stores that I have visited so far are all different in sizes and layout. Some of the new ones are getting quite fancy with more brick and mortar stores opening soon.

Stayed with Jack and Kathy then made a visit to Ken and Trish, Rudy gets along great with their 3 years old dog Wally. The two of them have lots of fun together.

Then all too soon it was time to make my way home.
Went to visit a friend at Montreal's Jewish General hospital, that brought back a flood of recent memories, but it's alright, I am glad I managed to see him, it has been a while. Hang in there brother, cancer really suck the life out of you, I hate fucking cancer......

Made it back to my brother on the south shore of Montreal (My stomping ground), then a couple visits in rural New Brunswick and we were back home late Friday.

While driving in rural New Brunswick, what are the odds of being ... 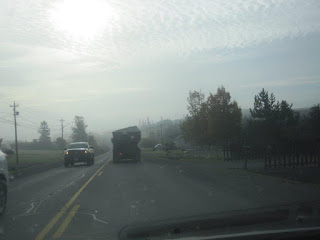 behind a Potato truck, or... 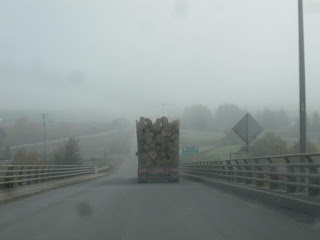 Just about 100%... that is just about their biggest exports. I took a small Hwy across the province, Hwy 108. At time I wasn't sure it was really a highway, if it was not for the signs along the way it could have fool me, 10 kms of gravel road (which was better than some of the paved sections), in the middle of nowhere NB, no cell phone range...hummm, the only traffic I encounter were logging trucks.. May have been shorter on the map, but i don't think it was any faster :-)

Bob and Rudy, will travel for friends and tools :-)
Posted by Valley Woodworker at 11:19 AM 17 comments: