Day 5, I am getting confused.  Me and Rudy are only allowed outside to the first tree by the garage to pee on.  Me and Rudy were talking about it with the fridge later on and as usual, he just gave us a cold shoulder.. so frankly I'm losing track of the days now :-)

Good progress in the garage, I can actually walk in front of the tablesaw.  And what a sad sight it is.  Long overdue for some TLC. 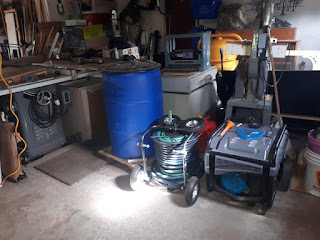 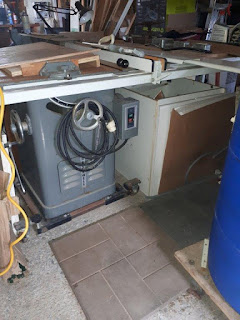 The poor thing is rusty.
Will need a make over for sure.
I could spend a whole pandemic on this one....

The Unisaw has remained like that since unloaded here in 2011.  I do not have 220 VAc in the garage, so cannot used it.   The bandsaw, I simply switched it back to 110 V and replaced the plug's end.

It was never a big rush to bring in the 220v in the garage, since I only have to drive about 12 kms to the Air Wing Hobby shop.  All the machines I ever could used are there, waiting for me.  Of course right now I have no access.

But been thinking. I was just using my AC gas generator to powered the cement mixer.  There is probably a 220V output on it, hummm, once Unisaw is cleaned up I could fired her up to check her out.

Cleaned up the parts I had soaking in Evaporust and added more pieces in the bath.  Rinse and repeat throughout the day.  Happy the way they are coming out off the wire wheel on the drill press.  But it is also very obvious how thick the gummy layer of old hardened lubricants was.  And did I mentioned very , very dirty 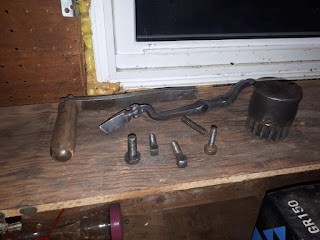 The parts are coming out pretty good.
But I'm not sure I want to take her all apart to clean each part.
Matter of fact, I know I don't!  Will see how far I decide to go.
May repaint it.
I see trace of red paint, but I think I'd rather painted it black with white lettering. 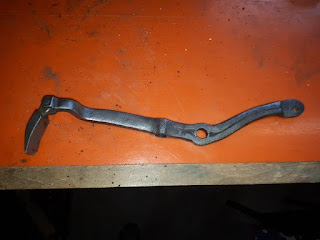 That is the lever that advance the drill down after every rotation via a cam follower.
Roller is removed in this pic, still soaking.
I was surprised to find that clearly added detail on the back side.
Someone chase the arrow and tail on it.  Unfinished perhaps?  It is a bit crude.

So decided that, since I am not ready to move it out yet to wash it, I may as well make it easier on me later by scraping off as much of that gunk on the DP.  Hours of fun time with a screwdriver scraper.  NO, not a Moores & Wright this time, I'm using a Snap On :-) 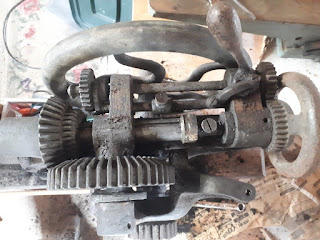 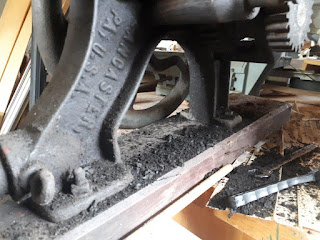 The dried up grease is very gunky and very dirty.
Maybe I should not had worn tan colored pants, Oups.

Between the vacuuming of all the hard floors upstairs, beating/vacuuming/washing/drying/vacuuming the carpets outsides in preparation for her to wash the floors...and.. You know, when she said : Do you have a minute? That is not what I was expecting.  Men, be careful, that is a trap question, run... :-)

Next time I'll try: I can't right now Babe,  I am watching a video of a cat taking a ride on a Roomba on You tube.  Yeah, Whish me luck :-)

After I was supposed to vacuum the carpet in the living room, but by then I ran out of gas, had a nap.

Between all that, dunked and cleaned a few more parts and tools 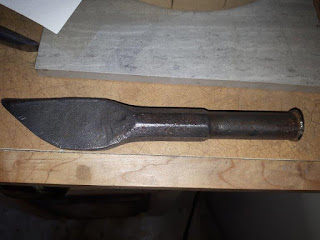 This was a very rusty punch.  After two baths.
This metal punch had a big burr all around the head 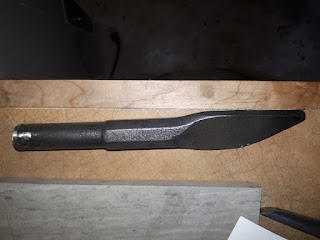 A few minutes on my hand grinder and gone.
Always grind off the burrs at the end of metal objects bashed on.
Also finished de-rusting.
Figured out the size of the fasteners I need to secure my post and the drill on the post. 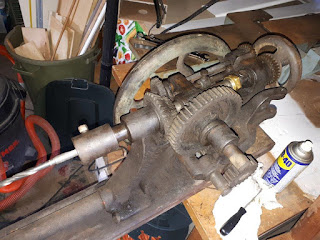 As I left it last nite.
Mechanism is mostly scraped clean, and everything which turns has been shot with WD40.
It is turning a lot more smoothly and faster, but that wont last WD 40 is NOT a lubricant.
Still need a wash down with Krud Kutter or WD 40.  THAT is going to be messy.  Not doing it inside garage.
Made some progress, very little, on the saw at the bench.  Its been jointed, now the sharpening can start.
The plate has been relocated lower in the vise.  That is about how far I went with that one.
And now wondering, maybe it would be smarter to finish cleaning the plate before trying to buff later a sharp plate??.  Right now it is just a dull grey out of Evaporust followed by a partially buffed coat of Autosol.
Need buffing it out, light sanding, 220, good wipe with cleaner, wax and buff.
Yes, almost done with that one, time to start planning the next one :-)
That took a big part of my day.
That and logging Ruby Jean on my network for home schooling.  Hours of fun ahead (??)
re-re-re shuffling some boards in the shop.  From logs I processed over 2 years ago. 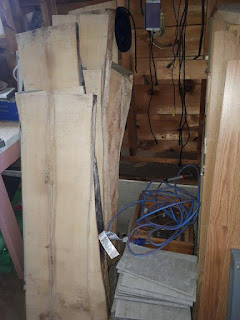 Silver maple that used to stand in my backyard.
Sufficiently dry to start using.  Some have developed cupping,
but nothing too serious and stable now.
Some of the smaller ones standing up on the cement floor had some sort of fungus starting, so I trimmed those board's end on the Chop saw. 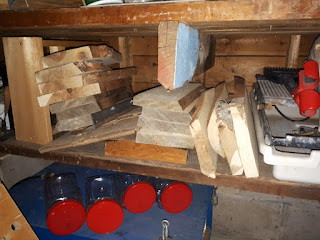 Rescues from fire pile, just because, I can :-)
Oh, and playing with the dogs also, which involve lots of walking around my property.
Rudy like to remind anyone that this is "HIS" territory.  Trespasser will be barked at and
Squirrels will be chased! :-) 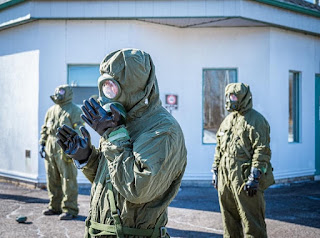 Me getting dressed to takes the dogs out :-)
Do I miss those days? Nah!

Bob, embarking with trepidancies on day 6 :-)

Posted by Valley Woodworker at 9:12 AM