Beside a good selection of handsaws and backsaws, there are a few more saws that you would find useful at your bench.

Cutting curves or irregular shapes
The Compass and Keyhole saw

Their names are pretty descriptive of their function.
The only noticeable difference between a proper Compass saw and its Keyhole brother is the width of the tapering blade. The keyhole being narrower.
There are also one of the most abused saws to be found out there... 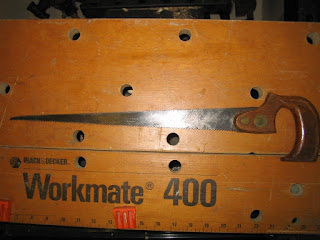 They both enable you to penetrate in a small hole and enlarge it as you go, due to the tapering width of the blade.  That same tapering is what allows you to make curves.  The wider the blade the longer the radius of the cut and vice versa.
You would think that the teeth should be pointing toward the handle to uses on the pull stroke to cut, since that put the narrow thin blade under tension.  But vintage ones have their teeth pointing toward the toe, no wonder many get butchered and bent out of shape... Go easy on it.

A similar, albeit larger version is sometimes to be found, it is called a "Table saw".
So called because it was used to cut the perimeter of the table top. Think ellipse shaped coffee table or round tables. Being larger curves, the blade is wider.

Not to be confused with the modern drywall saw, of which I go thru a few while using on cement boards... But it works in a similar fashion with the addition that its pointy nose let you punch thru to start the cut. Don't try that in wood, you will break your wrist :-)

A similar saw in construction but much smaller, is the Japanese carver saw. It works in the same fashion but has a much smaller tapering blade and of course, it has the infamous Japanese tooth geometry, which is designed to work on the pull. Much smarter! 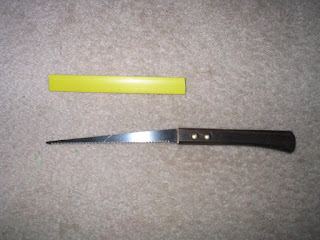 Careful, its thin blade is still easily bent if you are not careful. I found mine very handy to have.

The pad saws
So called because they provide a place to put your broken blades to good uses :-)
OK I'm being facetious, but they have typically a hollow handle and you can adjust how much of its narrow blade is sticking out, and you can also reverse the blade. Being adjustable as such, you can greatly reduce the likelihood of bending the blade in uses. And if you break it, simply reshape the nose and let more blade out. 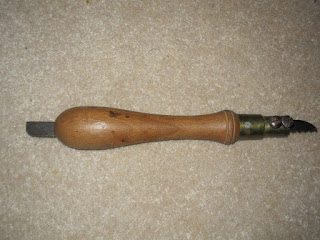 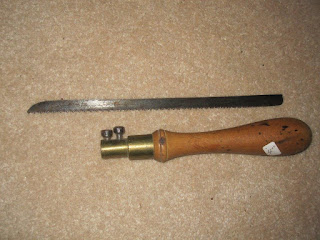 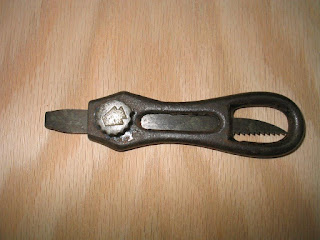 Disston Keystone No 5.
Its blade has a common screwdriver blade at the other end,
making it an early multi purpose tool. 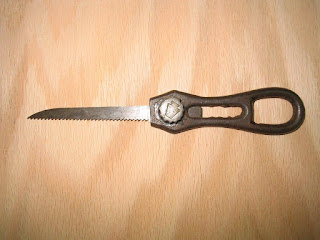 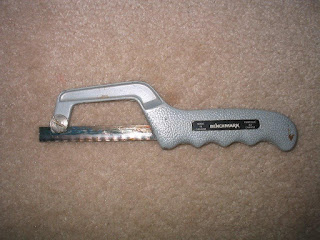 The Coping saws (think bandsaw)
So called because they are often used in trim carpentry to cope a moulding profile. But their small blade size makes them excellent at cutting irregular curves.
The good the bad and the ugly
This type of saw rely on the metal frame for its tension. The frame should be solid and have some give to be able to insert/replace the blade and have some external provision to further tighten the blade. Usually it is by twisting the handle in and out.
Most current hardware store variety are crap, because their frames are not rigid enough, too much give.

The older ones, like Disston and Millers Falls are pretty good, but suffer from the same weakness, there is no ability to lock the blade at preset angles. If you mainly use the blade straight up and down, not a problem, but when you cant the blade to be able to reach further in, it could slip on you. No deal breaker but be aware.
Throughout the years there has been numerous crazy ideas patented to solve that problem.
A good one, albeit a tad pricey, is without equal, the Knew concept design. 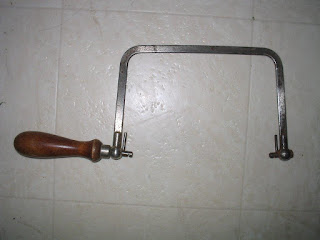 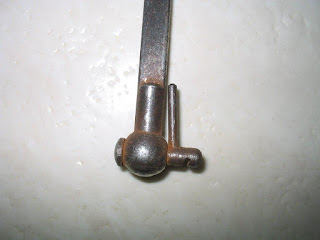 Blade turning mechanism has no provision to lock it,
relying solely on the frame tension. 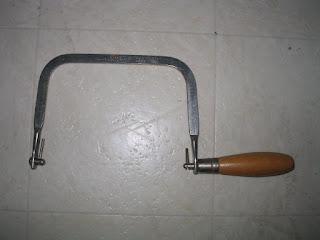 Disston No 10B.
A beefy solid frame. 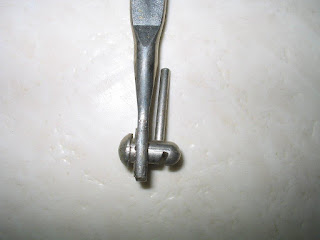 Has some means to hold blade at various angles.
See the serrations like a lock washer?

The Fret saws (think scroll saw)
Similar in construction to the coping saw, except that the frame is much deeper and its frame should be lighter, or you will tired soon.
Some have rigid blade mounts, some are designed to rotate the blade at various angles. 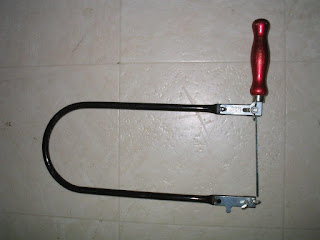 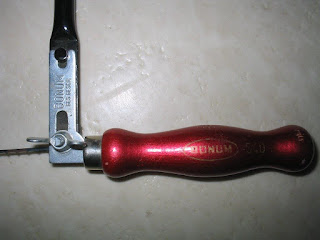 Fixed blade mechanism.
The blade is tensioned solely by the tubular hollow frame. 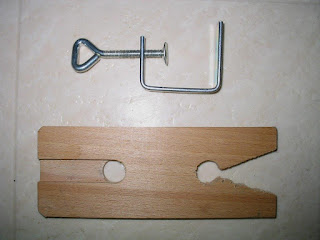 Typically, such fret saws comes with a bird mouth platform.
It provides support for the cut. Once chew up, make a new one.

Again the best design so far, is the Knew concept one. Love that saw. 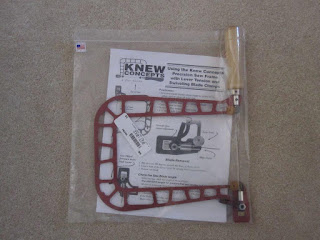 What I bought myself with my gift certificate
from my WO & Sgt mess departure gift :-) 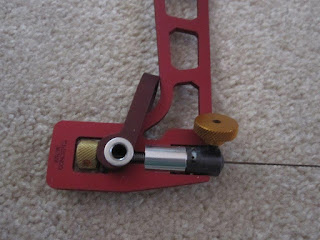 One of its secret revealed.
A solid blade tension mechanism with a preset angles selection 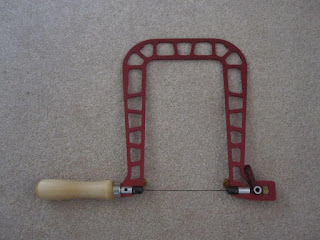 The other secret to its success is of course its
lightweight sturdy Aircraft Aluminum frame.
Yes the handle is blah! But you can buy an expensive exotic wood
replacement handle... Work just the same!

In dovetail work, you can uses either a coping,saw, a fret saw or a jeweler saw  to cut out most of the waste between the cuts of the dovetail saw. For the longest time, I eschew that method, but now uses it all the time. Hint; it saves wear and tear on your chisels :-)

Myself, I prefer using my fret saw (Knew concepts) because it uses a smaller blade, slide in the saw kerf left by my LN dovetail saw and because it has a great blade swivel mechanism that really work, I can go at long boards from both sides and reach pretty far. I have yet to be stumped by it.

One last thing, both coping and fret saws takes narrow blades. The coping blades have a through pin and the fret saws are pin less, being much narrower.
What do you do when you break your small narrow fret saw blades?
Depending how badly or not it became, you can used them in an adjustable jeweler saw frame. And yes, you can always put in a new unbroken blade in them :-) 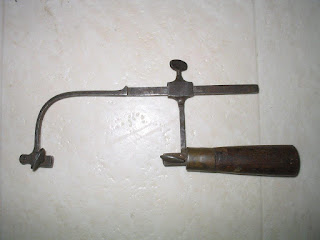 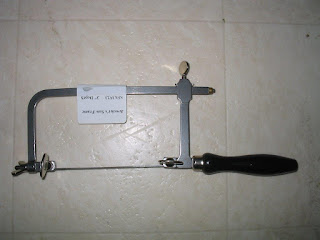 Your choices of blades will vary depending on the material to be cut, but since they hold replaceable blades, all these saws would benefit greatly from using a good blade. My go to have long been Olson blades, but lately I tried Pegas blades. I'm also a fan of skip tooth (in my bandsaw, coping saw and fret saw) 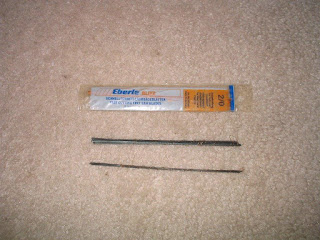 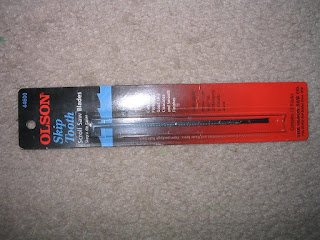 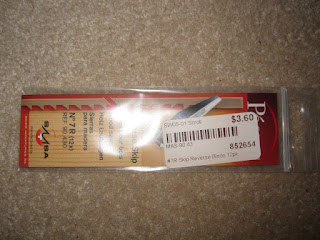 Bob, coping with his saws assortments
Posted by Valley Woodworker at 9:17 AM