A mouthful to pronounce isn't it?

A hand saw hang angle refer to the position of the handle on the saw plate. By varying this angle we can change greatly how the saw feel in our hand and how it will cut.

Ever noticed how some handsaws feel tiring after a short time of use while others do not?
How some seems to cut more aggressively with the same tooth geometry than others?
And how some seems to be easier to start?

With everything else being equal, All of these "effects" are a result of different hang angle.

There is apparently no consensus as to how to measured it and expressed it in degrees, but nonetheless, we can graphically show it and understand what it does. 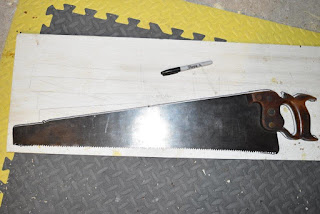 My baseline saw, a Peerless rip saw.
The tooth line is parallel to the edge of the board 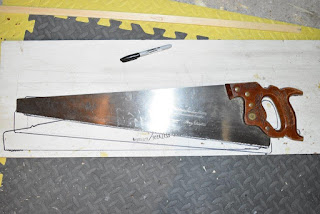 Disston D23 from the 1950's
The handle is lined up the same, but look where
the tooth line is now pointing ! 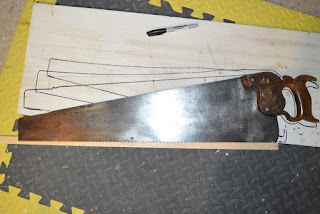 This one, a Disston No 7 is pointing quite
a bit downward from my baseline.

Notice the saw's outlines on the white board showing the wide variations in angle between a few selected saws (4) from my saw till.
Now you can appreciate why it gave me so much fun trying to find a compromise to accommodate them all. Remember they are all resting on the top horn of the handle in my till.

Another way to look at it, is to visualize a line perpendicular to the handle (the part that meet the flesh of your palm) extending to the saw tooth line.  Using this method, you can look at pictures of saws and get some ideas of the saw's hang angle.

Make a T, put the short part on the handle as described above, the long part is pointing to the tooth line. 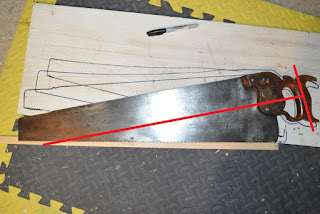 On this saw we are directing much of our force toward the toe.
Typical of older saws 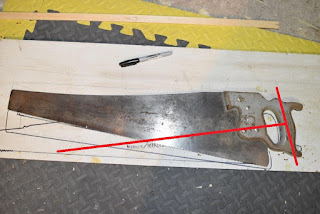 This Disston D7 move that force down roughly to the middle on the tooth line
Hang angles are approximate. I do not know if my drawn lines are exactly 90 degrees, nor do I know if it is aligned correctly on the handle.
But you still get the idea...

Notice also that it is defined by the line of thrust. That is saying, where all your force pushing the handle is going....toward the tooth line... (long red line)
Being a ramp, some of the force is going forward, some of it is going down.
There is an obvious difference between the two pictured above.

Notice also the more modern saw (grey painted handle) has a skew back. That is in an effort to better balanced the saw in your hand.  Between the taper grind and the skew back, it makes the toe less heavy, which is a good thing considering where the balance point is!

You can see where the line hit the saw tooth line varies considerately.  It also happened to be where your thrust line is. That is why some saws would be harder to start while other would be easier.
It is also why some would be more tiring to use than some others.

By shifting that thrust line up and down the saw tooth line we are also changing its balance in your hands, again some will feel more comfortable than others, while some will quickly tired your wrist.

Have a look at these Disston handles and try to visualize the hang angle using the T method... Hours of fun in perspective :-)

Another point to notice is how the handle is attached to the saw blade. You will find anywhere between two, three saw nuts to five, and their arrangements varies. In some collector's circle they claim that the number of saw nuts is an indication of quality, the more the better. Not exactly. It has a lot more to do with, you guess it, that darn hang angle again ! Because depending on the angle and the resulting thrust line, the number and position of the saw nuts changes. If it didn't you would notice more broken handles... 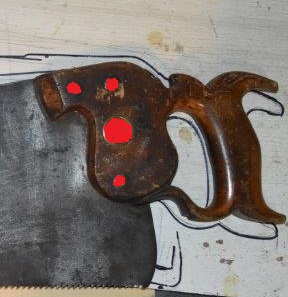 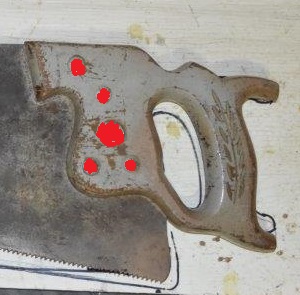 Run a line thru the medaillon with the most saw nuts and see how we intercept the thrust line? Those saw nuts are lined up to take that pressure and transmitted it to the saw.  Notice where there are two nuts, they are parallel to the yellow line? Coincidence? I think "nut" , saw nut to be exact :-)
Bring out the re-enforcement said the nut to the saw !! 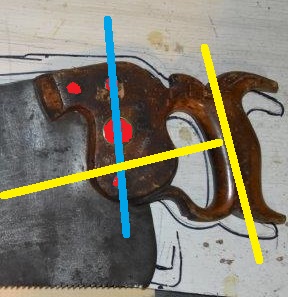 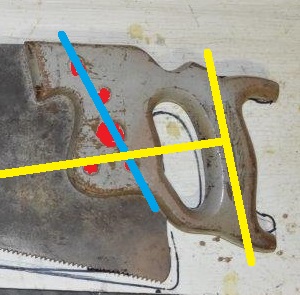 Again not an exact science but you can visualize the large differences the saw's hang angles is having. Both on how the saw handle is attached to the saw plate and how it is going to affect its balance and feel in your hands.

Now, I don't think that the yellow and blue lines are supposed to be parallel, but it does give you an indication of where the thrust line is going.
Obviously, one is lower than the other. That's what I meant earlier when I said the saw nuts positions on the replacement handle I carved dictated my saw hang angle. Whatever hang angle I wanted on this handle, I better pay attention to the saw nuts position... or drill new holes. 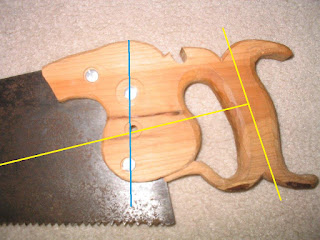 Backsaws are different animal, you can used the same technique to visualize the hang angle but they also introduced another factor, the "cant" (the angle between the folded back of the saw and the tooth line, parallel  or taper?)
Most of the thrust lines are going downward to the tooth line as opposed to toward the toe of the saw in some older handsaws.
That is because we are cutting joinery, not cutting apart a long board to size.
We want the weight of the saw to help sink it down.

I bet you will never look at a handsaw the same ever again!
And it is a good thing.
Armed with this knowledge you can better understand which saws fit you better, both in sizing and balance. And which ones are less likely to tired you...

In an other part we will look at body mechanic while ripping or cross cutting.
Yes Virginia, there is a Santa Claus, and we don't attack the wood at the same angle. I bet you have some idea why by now :-)

Bob, the hand saw archaeologist digging up dirt on them
Posted by Valley Woodworker at 9:15 AM