Another recent Kijiji finds, an almost perfect specimen still in the cardboard box with the instructions pamphlet. It was a bit out of my way, Truro NS, but it was a good ride in the country side, and it so happened that one of my girlfriend sisters lives in Truro, so great excuse for a visit. Thank you Crystal and Paul for the hospitality :-) 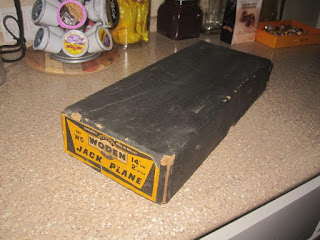 Black covered paste box with yellow label.
I gave it a quick wipe, it was quite dusty... Coming from a typical powered woodworking's shop :-) 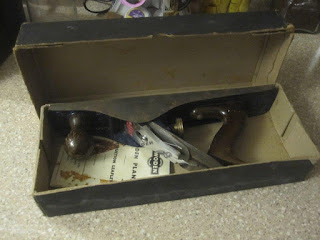 What is inside, complete with plane pamphlet 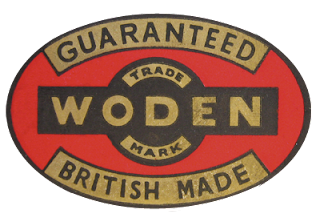 The Woden company of Wednesbury Staffordshire (1868-1961) was a maker of a limited range of hand tools for woodworking such as ratchet braces, carpenter bench cramps (vises) flooring cramps, wrenches etc. They had a steel foundry and were equipped to make all the parts required to make hand tools. The hand tool division was relatively small within the overall product range, of metal castings, nuts and bolts and related steel products.

Like most British companies that were heavily involved in the war effort (WW2), the company struggled to return to normal products production due to a shortage of raw material and qualified manpower.

They did not manufactured metallic planes until 1954 after acquiring WS Birmingham in 1952. Part of this acquisition gave them the redesigned copy of the Stanley No 78 Duplex Rabbet plane, the dual fence rail WS78, which would later becomes Record 778 after Record purchased them in 1961.

Paul Sellers really like them so you know they are every bit as good or better than Stanley and Record.

This was a somewhat limited offering compared to Stanley and Record, but in order to compete they had to produce a high quality and finish product, which they delivered. They are as good, and in the case of the W78, better than the originals Stanley and Record copies (No 078 specifically)

In the early 60s Record was expanding by purchasing rivals manufacturers, they acquired Woden in 1961 and moved operations to Sheffield.

Early on the planes had a mixture of parts from the old Woden's parts and the newly produced ones from Record.
Gradually, all parts were being made solely by Record, with a few small modifications in materials and design.
Record continued to produce the Woden range under that name until about 1965
Other products were continued under Record own model numbering, such as the W78 which became Record No 778.

Lets see what we have here and try to narrow it down to a period of manufacture. 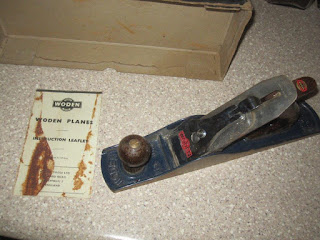 According to this site there are 5 different productions variations, or Types:
As usual for these Types studies, it is based on the No 4 (W4)

Three (3) from Woden and the last two (2) when Record took over:

- Bodies without "QC" marks (in house)
- 2 inch frogs with 2 lower panes, without "Q" marks but with single 5.5 mm       marks
- 2 inch lever caps without inside bottom flat, with or without rounded bottom edges
- Type 1 or 2 cutters
- Type L1 boxes and Type 2 or 3 Woden Plane Instruction pamphlet

- Bodies including the "Q" or "QC" foundry marks (out sourced to Qualcast foundry)
- Frogs with "Q" marks and 5.5 mm marks
- 2 inch lever caps without inside bottom flat and square corners
- Type 2 or Type 3 New Improved Cutters (NIC)
- Type L1 or L2 boxes with or without NIC label, and
- Type 3 or 4 Woden plane instruction pamphlet

"Changeover" planes were being assembled in Sheffield (Record) with Wednesbury made parts (Woden). There were problems with Record using a mix of Woden and Record manufactured parts that were using different screw threads. Woden used mainly BSF screws and Record  used the historic Stanley and BSW threads. This resulted in some re-machining and or a few special "one of" parts to be found

- A Record body shape with just "No 4" in front of, or behind the knob and NO "Woden" cast marks
- A Record type frog having a thicker USA UNF thread depth adjustment screw
- Record unmarked adjustment wheel
- Record 3 pieces lateral adjustment lever with a bottom fixing rivet
- A lever cap with either a Woden cast mark with a red or orange background
- Later Record production had no Woden cast marks but a simple transfer decal near the top
- Lever cap handle is shorter and curved is more pronounced. Woden made had a lever length from cam boss to tip of about 29 mm, Record about 26 mm
- Record wood parts with Woden transfer slide decal on the handle top
- Record small parts: Cheese headed frog screws, straight frog clip with round
head screw and Record BSW ended studs for the handle and knob

My example as found: 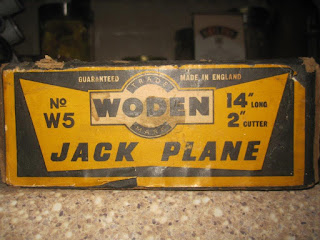 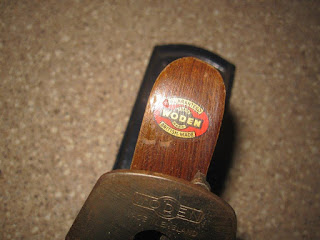 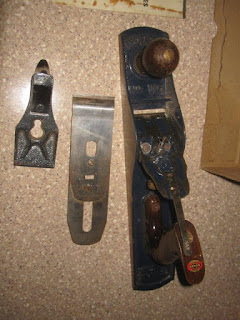 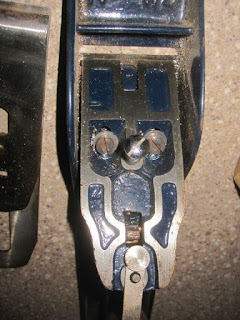 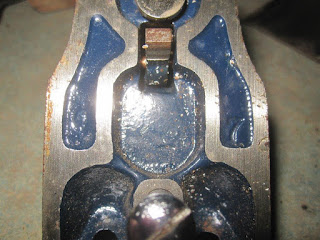 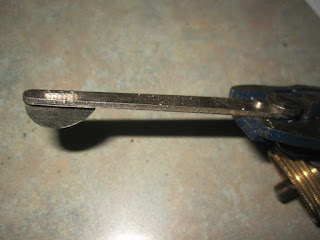 Three (3) piece Lateral adjuster.
Earlier Woden had a simple bent tab at the end of the lever 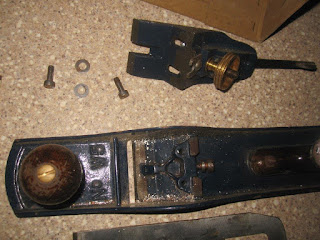 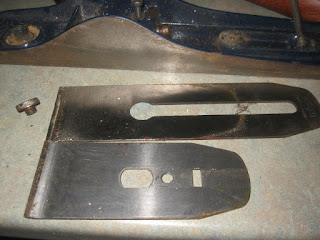 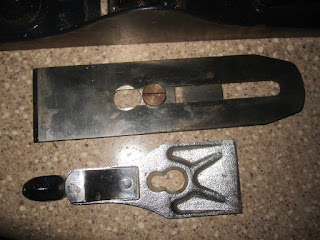 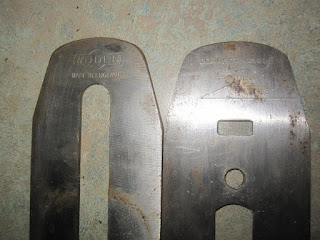 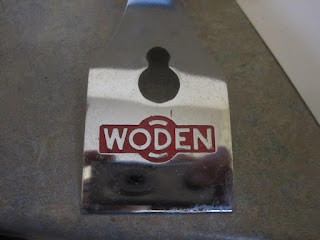 Square bottom edge on lever cap Type 3 1957-61.
"Woden" red paint, "Record" had more of an orange paint.
From about 1956-7, the plating improved and did not easily flaked and resist corrosion better. This thing is perfect... 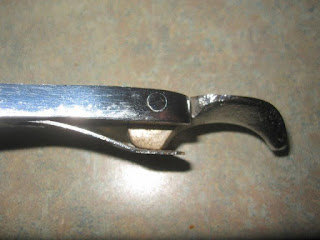 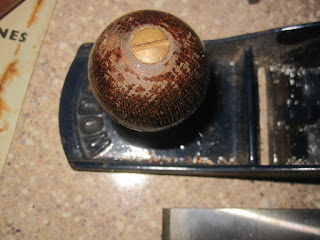 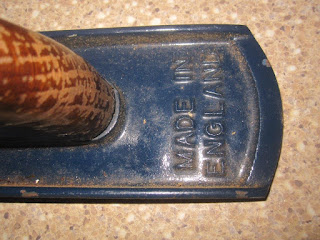 Knob and tote have some finish flaking off. Lacquer, Shellac or Varnish?
I see this typically on Record tools. 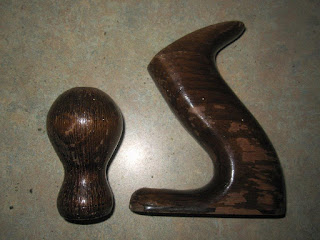 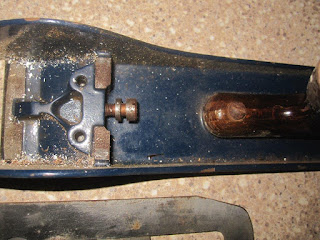 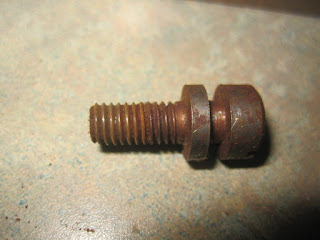 Frog adjuster screw has square end (Woden)
Later Record has a more pointed end like a set screw.
This is just about the only rusted screw on the whole plane. 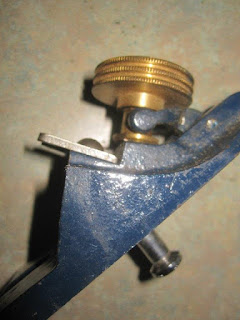 Notice the slight angle machined on the frog for the clip.
Frog capture clip is angled with a straight clip (Record), Earlier Woden had a near vertical casting and an angled clip 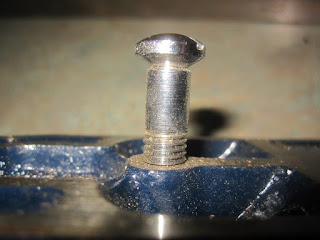 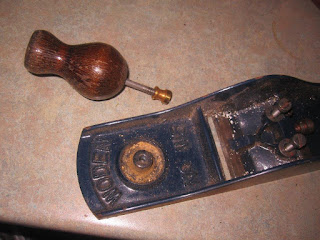 Front toe casting shows WODEN and No W5
Later Record made models had only No 5 cast in front of knob
Knob shows waisted barrel nut, earlier were plain cylinder. 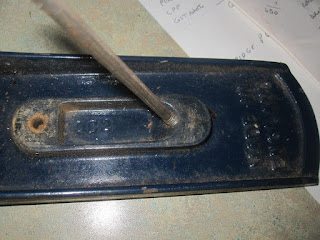 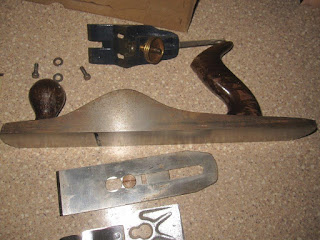 Side show some minor discoloration 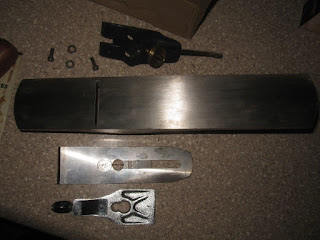 Sole has virtually no scratches 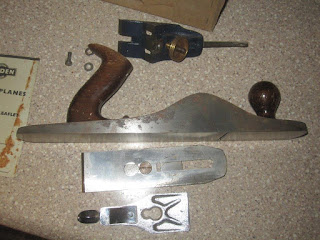 This side shows the most discoloration, light surface rust
should easily cleaned up


Everything point to an earlier Type 4 1961-62 Changeover period plane.

The japanning is in perfect condition, there are some small stained surfaces here and there on the bright metal parts. The level cap is just like new, the iron is unused and full length but has some small chips at the cutting edge. The wooden parts, tote and knob have no defect except for flaking off protective coating (shellac or varnish) here and there. The box is in good shape but the pamphlet has some rust stains on it. All in all, an unusual find in great shape. I don't often run into these. Quite the score : -)

Well worth the travel to Truro and got to spend some quality time with Jean's sister Crystal and her husband Paul... Bonus :-) 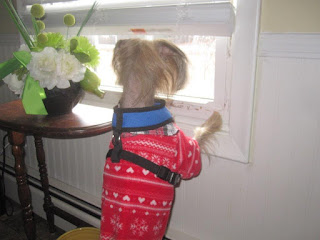 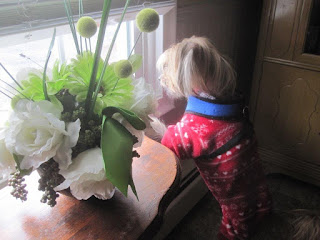 Rudy awaiting the return of his beloved Jeanie.
Everytime he hear a vehicle in the yard he rushes to the window :-)

Bob, who had a biopsy of the prostate this afternoon... Another cancer scare? Bring it on, i'll fight you till the end!! This would be round 3 for me with cancers, Heather had 2.  I am not worry but getting frankly tired of it all... :-(
Posted by Valley Woodworker at 7:16 PM