Why did the screw hole location changed on Stanley type irons?

Part 2 of my answer to Ralph of the Accidental woodworker 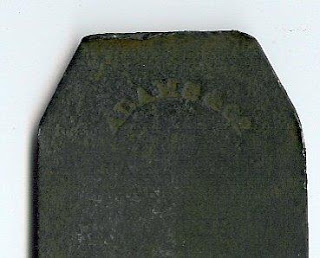 That hole was first introduced to facilitate removing and installing the new fangled cap iron making the blade a double iron. Such double iron first appears around 1760. That long slot is required in order to re-adjust the cap iron as the blade get used up by repeated sharpenings. 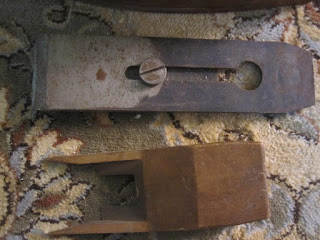 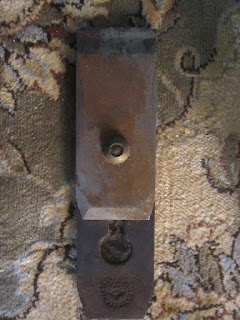 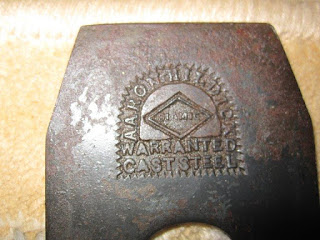 Then around 1892 it moved to the bottom, first introduced by Stanley.... and for good reasons...

But as you can see above,  well after Stanley moved the hole location down in 1892, the traditional hole on top remained for a while. That was a patented feature from Stanley so no one else could do that without paying them royalties.
Yet many sources stated that the hole on the top indicated a blade made prior to 1895 (or 2), that would be not quite true, but some sort of indicator.

But why did Stanley made the move?

Because starting with the TYPE 5 1885-88 a new feature appears on the Bailey design, the Lateral lever.

Then at TYPE 6A 1891-92, the new feature was the relocation of the hole at the bottom of the blade near the cutting edge.

The raised lip at the end of the original lateral lever was soon replaced by a small disk, its job is to engage the slot on the blade and allow side movement (lateral) by skewing the blade left and right.
The problem that was soon discovered was, as the blade is used up by repeated sharpening, the big hole on top falls in the spot were the lateral lever engage the slot, negating its proper usage.

Solution? Move the hole at the bottom and problem solved.
You can now used that blade to its last inch of its life...

Of course that problem only appears on planes with the Stanley type lateral lever, other design do not need that "fix", that and the feature was patented, so no one else could claim it.

So how did Stanley explained that newly introduced feature?
If you were to believe their tool propaganda in the literature, they claimed it was for ease of installing/removing the blade from the cap iron.

QUOTE " The improved form of this plane iron renders it unnecessary to detach the cap iron from the blade, at any time, as the connecting screw will  slide back to the extreme end of the slot in the plane iron, without the danger of falling out. The screw may then be tightened, by a turn with thumb and finger, and the cap iron will serve as a convenient handle, or rest, in whetting the cutting edge of the plane iron." UNQUOTE 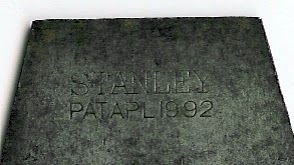 Hum and how does that work in practice? Never found that to be a problem or hindrance or even a plus, to have to hole located on top or bottom while sharpening, and I always separate both.

As far as the argument that you can slide the sharp edge without rubbing it along most of the blade while re-installing, that too was never a problem in my book. Regardless of how and were you re-install the blade on the iron, you have to be careful to protect that sharp edge anyway... 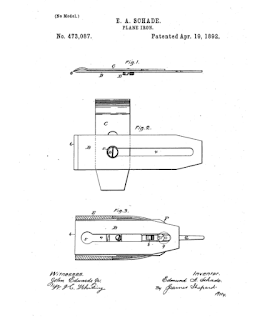 Original Patent by Edmund Schade assigned to Stanley
No 473,087 Apr 19 1892.
Ŀook carefully the dotted top hole location were it would had fallen
if not relocated.

In the original Stanley's patent the following claims were made:
My invention relates to improvements in plane iron's; and the objects of my improvement are to facilitate the manufacture of the plane iron, to improve its quality when made, and to make the iron capable of being worn down farther than the old style of iron used in conjunction with certain planes...

We also have annectorial evidence from court testimony of Stanley employees during a patent infringement case against the Ohio Tool company (to be later purchased by Stanley) .

The OHIO Tool Company, one of Stanley competitor who produced almost identical copies of Stanley Bailey design, had of course the same problem with theirs. Their solution was to make the hole at the bottom but made it shaped like an hexagon instead of circular, in a bid to avoid patent infringements.

Too obvious of course so Stanley took them to court... and lost.

On May 16 1902, the judge citing that QUOTE " Schade device may be an improvement upon the previous devices, but it is only so in degree. The problem is so simple and may be solved in so many different ways that invention cannot be predicated by its solution in one particular way. The court is unable to resist the conclusion that Schade's achievement was only what might be expected from a clever mechanic, and that no new results, such as contemplated by the patent law, was attained thereby. The bill is dismissed" UNQUOTE.


Stanley would appealed the case on Oct 3 1903, and the ruling was upheld and Stanley ordered to pay the court cost of Ohio Tool Co.
Judging by the amount of time and money Stanley spend fighting Ohio, it would appears almost vindictive...

And what about the claims about the quality improvements of the irons by relocating the hole at the bottom ??

QUOTE "By making the circular enlargement at the end of the slot, which is nearest the cutting edge, I am enabled to make the plane irons by pressing them out from sheet steel, and to harden and temper them to a point, so that fewer irons are lost in hardening and tempering, and are less liable to become cracked or broken at said point after they are put to use. This is because there are no angular notches at the lower end of the slot from which a crack will start." UNQUOTE

Well, I have never ran into a blade with its hole on top cracking in use, mind you all the ones I ever saw had a rounded end to the slot, not a square end...
Although, if you were to press them from sheet steel versus hand forging them, perhaps it would have been a different story??

And then we have Stanley manufactured blades in the early 20th century with the hole still on top for their Siegley copies, such as found by Ralph. Humm so much for their claims of better blades quality with the hole at the bottom...
In manufacture, they simply reverse the blade at punch time.

So there you have it, the reasons the hole moved was to enable the blade being used up to the last inch of its life on a Bailey type lateral lever plane AND ease the manufacture of cheaper blades by stamping them prior to hardening.
Clever perhaps, but no where near the claimed reasons in their tool propaganda literature...

And that is what history has recorded about it

Posted by Valley Woodworker at 8:46 AM