Hand tools, unlike most power tools, do not have any serial numbers or other distinctive markings to help dated a tool

Among collectors, in an effort to help date or more correctly narrow down to a more specific time period a given tool, for years now, they have come up with Type studies.

WHAT ARE TYPE STUDY

They are the results of examining numerous examples in order to group various distinctive changes or features into categories (Type) then trying to attach specific dates as to when such changes or features took place in the tool long history of production.

Most of the current type study we see today were developed before a little thing like EBay came into being.  Suddenly, as numerous examples came to the front it had a ripple effect on type studies, price list, rarity and etc.
Some tools that were thought to be rare became more common once the collecting of tools started to become more trendy in the last decade or so and more of them became available thru sites like EBay.

Along with the larger quantity of tools being available, new features and changes became apparent Type studies had to be updated to reflect this.

Adding to the confusion is the fact that relying on catalog and advertising copies in magazines and such is often misleading because companies recycled their "wood cut" (carved block, inked to print tools outlines and such) throughout numerous years. Millers Falls for one was notorious for that, but so was Stanley and al...

You also have to realized that at the time all these tools were produced, their manufacturers had no idea that someone would be trying to pin point a date of manufacture by the various features down the road.  In addition they would used up their inventory of parts as they went. Therefore not all the tools came out with the same parts during the in-between time periods.

And then we have a more modern phenomena, since a lot of these tools are now being restored to be users, some parts are replaced to make them functional or replace missing parts and etc. The cutter blades being used up eventually are often found replaced for example.

In addition since tool collecting has become quite popular, with an increase in prices (they are after all in a limited supply) Some unscrupulous vendors will change parts or modify them to pass as more collectible and rare "types".

One of the most commonly referred Type study is probably the one covering the Stanley bench plane No 4.
It is often used indiscriminately across the whole bench planes models No 1 to 8 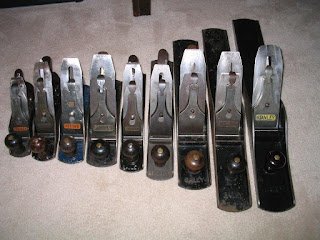 There are of course some caveat to doing this:
The No 1 was in short lived production and because of its diminutive size, did not had all the "new features". For example they never had corrugated sole.
It does have its own Type study BTW

The No 2 to 8, similarly, did not had all the features of the No 4, and to add confusion to the unwary, it was based strictly on the Made in USA models.

Stanley also produced most of these bench planes in Canada, England,  Australia and possibly Germany (?)
Again, not all of these will "fit" the American type studies.
All that to say, Type studies should be used with a grain of salt and not as the absolute definitive answers.

Are they still relevant? YES, as long as their limitations and usage is understood.

I will share with you my own Type studies features that I compiled thru the years with pictures (mostly collected off EBay) whenever time permits.

I did this years ago to make sense of all the sometimes confusing descriptions of the features in question.

I am currently pretty well on full time nurse duty right now.
But not to worry I have lots of support at home, from the palliative care nurses, doctors, home support workers and of course our numerous friends.

Bob, dusting his old files while waiting for Rudy to finish his "beautification program" (doggy grooming :-)
Posted by Valley Woodworker at 3:38 PM