Jean and I are part of the Glooscap First Nation Elders society.  Jean is the vice president and I, do whatever she asks me to do :-)
We meet once a month and are trying to revive interest in the group by showcasing various crafts as part of our gatherings.  Last month, Jean did candle making, then she volunteered me to do bird houses today.  Next month she will be making wreath.  Hopefully someone else will pick up after that, or my turn will come back fast :-)

But jokes asides, I don't mind and it is fun.
The challenge was how to pull it off in a relatively short time, while using basically very simple instruments.  Just something up my alley :-)

The nite before, I gathered my tools and supplies, read up on birdhouse, downloaded and printed some materials to pass around, etc

My original bright plan was to round up some of the decorative bird houses around my yard as example, then build one like I will be demonstrating and build it all from one board 1X6X6 ft with no power.

That's where my brilliant plan started to unraveled fast.  I got stuck in a struggle to keep my tool kit light and minimalist.  Those that knows me will understand why I struggled with minimalist intentions, so many choices :-) 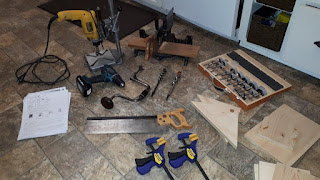 The scene last night on my kitchen floor, trying to decide on what to bring

Oh, by the way, me and Rudy are left without adult supervision for two days, Jean is gone to a retreat with the grand kids.  Will try to keep out of trouble :-)  Yes Dear, I cleaned up my mess :-) 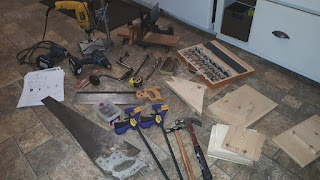 After a few (too many) iterations, this is what I got before calling it quit at 2130.
I did not build one that nite, need a longer board than I was willing to sacrifice

Part of my bright plan was to showcase a few different tools to do the job.  But not knowing my audience genders make up and interest, I had a few back up plans and parts to skip ahead :-)

Sure enough, it turns out that I had an all female audience today, so I concentrated on the technical details, read going over some of the critical features of a good bird house.  Stressing the why and no-no's.

I made some last minutes changes to my tool kit, of course, but still managed to forget to bring some stuff like screws, nails, drivers bits, square, pencil... So much for last minutes preparations.
OH, and I forgot to bring some example of decorative birdhouses with me.

No biggie, had to make a stop on my way to buy a 1X6X6 ft long Eastern white pine board and a box of Hot Dipped Galvanized (HDG) finish nails.

Thankfully I had my tape measure, which I temporarily misplaced last nite in between two beers.
At one point I even text her asking if she has seen my tape lately?  I'll abbreviate the answer to just NO :-)

So armed with my trusty Disston D7 cross cut saw I proceed to cut my board into 6 pieces.  I was going to bring my saw horse, but nixed that quickly last nite, it would had entailed moving around too much stuff.  I made do using two foot rest from one of the couch.  That worked well until my board became too short and was impossible to keep straight on the upholstered saw horse.  Switched to a regular chair to finish my last cuts.

This is where I got my dimensions and most of my data on bird houses
http://www.birdwatching-bliss.com/making-bird-houses.html

After going over the requirements of a proper bird house, explaining the dimensions and hole size and location etc, etc. Came time to drill a  1-1/2 inch hole.

Shown the options: Brought a corded electric drill, mounted in a small portable drill press attachment.  That was because of one choice option for the bits, the Forstner.  By hand you risk to mess up or break your wrist, especially with the larger sizes with saw tooth edges.
Then shown the cordless drill with two types of paddle bits (skipped the lecture on bits geometry) and the brace.  I of course choose the brace, a Spofford brace with a big center bit.  I tried it last nite and it was more chewing than cutting, so I gave it a quick touch up sharpening and big difference.

Came from both sides as soon as the center pin goes thru, to minimize splinters.
At this point realized that I forgot both sand papers and rasp,  but discussed the importance of a smooth entrance hole and some of the way to guard against predators or other bully bird species.
Putting a double layer of wood around the hole or putting a metal ring, piece of flat metal stock etc.  All to prevent them from chewing the hole bigger

Then one more important detail, we need to makes some sort of scratches with saw blade or a small gouge, on the inside surface of the entrance hole board to give the bird a way to climb his way out.

For assembly I used no glue (unnecessary) but if I was using one, it would need to be outdoor rated.
Shown them the differences between regular shiny finish  nails and HDG ones.  The irregular surface texture helps them grip better.  For added strength I shown them how to dovetailed the nails.

One side panel is not nailed in but is held only by the two top nails acting as a pivot hinge.  For cleaning and inspection. 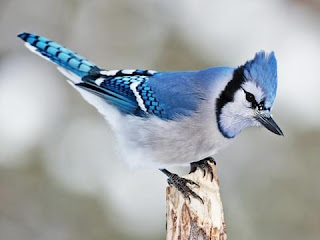 The intended recipient of my bird house

I was purposely wearing a Toronto Blue Jays T-shirt, asking them to guess what type of birdhouse I will be building?  Apparently, not many of these ladies, if any, follows much Major League Baseball, Toronto MLB team are the Blue Jays :-)

After about 1/2 hour, I had this rough but serviceable bird house to show. 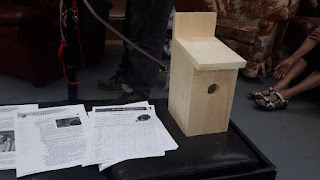 I changed the plans on the fly, I angled down the roof instead of straight across.
Yes, the bird house is resting on top of my upholstered saw bench :-) 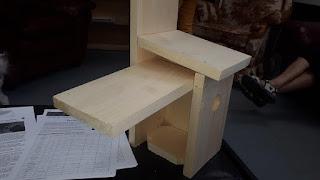 The left side opened up for inspection and cleaning.
The bottom floor has its four corners cut off.  That is for drainage and air ventilation.
Yes, sandpapers would had been nice, oh well.


I ended up with a 19 inches piece left over from my 6 ft board.
5 straight crosscuts cuts with the D7
One angled cut (yielding two match angled sides) with the D7
One hole with a brace and center bit
Cut the corners on floor piece (4 cuts) and made a few saw cuts inside the front piece with a tenon saw, crosscut
Assembled with regular claw hammer and HDG finish nails 1-1/2 in long and voila!

Of course having forgotten my screws, it is missing a small crucial detail.  You must secure the side against predators opening it.  That's why the side opening is a better option than a top opening.  Also makes its easier to clean.  Important in between residents to not transmit diseases among them.

I would add one screw at the bottom to secure it down.  Yes, you need to open it with a screwdriver, but it is very secure.
Small inconvenience for us, peace of mind for the residents.

Then a clean up and make ready for a special birthday girl, Patty Smith, who is or is one of the older elder on the reservation. 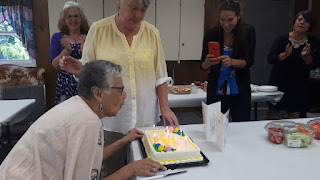 The birthday girl is blowing her candles.
It was successful :-) 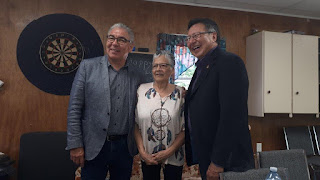 We had some special visitors dropping in to wish her happy birthday.
L-R Chief Sidney Peters of the Glooscap reserve, Patty Smith and Canadian Senator Dan Christmas

And Rudy during all of this, you ask? I left him with his doggy girl friend at Jean's Mom place, whom I picked up for the gathering.  The two of them, Rudy and Eva, gets along very well and keep each other company.

Back home later had a nap then supper. 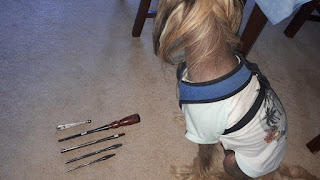 Long day but an interesting one, we both learned a lot more about bird houses.

Bob, and Rudy still unsupervised for one more nite :-)

Posted by Valley Woodworker at 8:24 PM